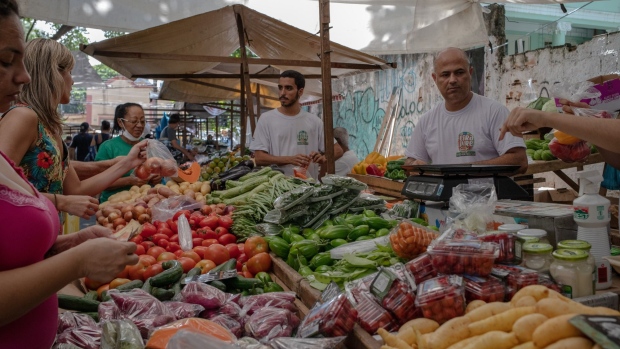 Shoppers browse produce at an outdoor market in the Tijuca neighborhood of Rio de Janeiro, Brazil, on Tuesday, April 5, 2022. Although Brazil's central bank is months into an aggressive tightening campaign, the country's inflation rate was still 11.3% in March. , Bloomberg

The bill’s latest price tag is 41.3 billion reais ($7.9 billion) after congress included cash handouts to cab drivers and small farmers on Thursday. The original proposal cost 29.6 billion reais that would be used to compensate states that accepted to scrap taxes on fuel. It was later changed to a package of social benefits that also includes:

Soaring fuel prices and inflation running above 11% a year top the list of voter complaints ahead of the October election, with most Brazilians blaming the country’s economic woes on the incumbent. Bolsonaro trails former President Luiz Inacio Lula da Silva in all major opinion polls.

Bolsonaro had to “step in” to help overcome pushback from the Economy Ministry to more aid, Senator Flavio Bolsonaro, one of the president’s sons, said in a speech at the senate. The bill is expected to go for a vote still on Thursday.

As it’s a constitutional amendment, the text needs to be approved by three-fifths of lawmakers in both houses of congress -- the upper and lower house carry out two separate rounds of voting each.