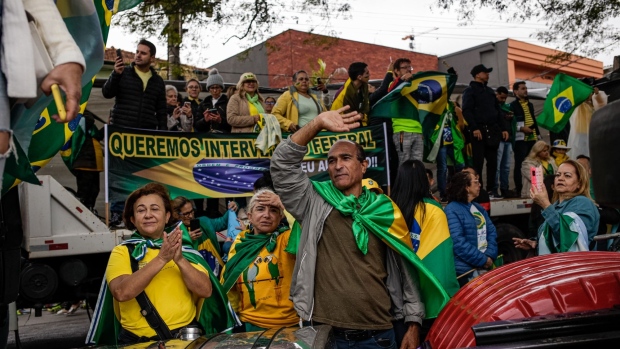 Demonstrators during a protest at the Military Police Command Headquarters in Sao Paulo, Brazil, on Wednesday, Nov. 2, 2022. Brazil's protesting truckers lifted some road blockades Wednesday after President Jair Bolsonaro broke a two-day silence following his election defeat by calling for the demonstrations to be discontinued. , Bloomberg

The court’s president, Alexandre de Moraes, on Wednesday ordered the Liberal Party to pay 23 million reais ($4.3 million), saying it was acting in “bad faith” and trying to undermine Brazil’s electronic voting system. Moraes also blocked transfer of public funds to the Liberal Party and sent the case to the supreme court.

Bolsonaro’s party maintained on Wednesday that older models of electronic ballots had problems that make it impossible to properly identify the machines, and requested that votes cast through them be annulled. If only new models of the machines are deemed reliable, the conservative president would be re-elected with 51.05% of the votes, the party said in a complaint filed Tuesday.

Yet the Liberal Party didn’t extend the challenge to the first round of the vote, as demanded by electoral authorities as a condition to consider the case. Had it done so, it would have angered many of his own members who won seats in congress during the first round.

Even as the complaint was rejected by the electotral court, the allegations are energizing Bolsonaro’s most loyal supporters. Many of them continue to block highways across Brazil, repeating unproven claims of election fraud and demanding a military intervention.

Valdemar da Costa Neto, the party’s president, has been under pressure from Bolsonaro and his allies to cast doubt on the result of the election, according to two people familiar with the matter.

Costa Neto has tried as much as possible to appease the president without upsetting electoral authorities. Before publishing the report that raised questions about Luiz Inacio Lula da Silva’s victory, he reached out to Supreme Court justices to explain the reasons why he was doing so, the people said, asking for anonymity to talk about internal party issues.

The Liberal Party has traditionally been allied to those in power, regardless of their political ideology, as its members tend to be more concerned about ensuring federal funds for projects in their home states. It was an important ally of Lula during his first two terms in office, with then-Vice President Jose Alencar being one of its members.

The party became the largest in congress, electing 99 of 513 lower house representatives, after Bolsonaro and candidates backed by him joined the group to run in the this year’s election. Currently, about one third of its elected lawmakers come from Bolsonaro’s camp.

Parties with a larger number of lawmakers have access to a bigger portion of public money that’s set aside to fund their operations. In order to keep those funds under his control, Costa Neto needs to make sure Bolsonaro’s supporters don’t leave the party before their swearing in ceremony in February.