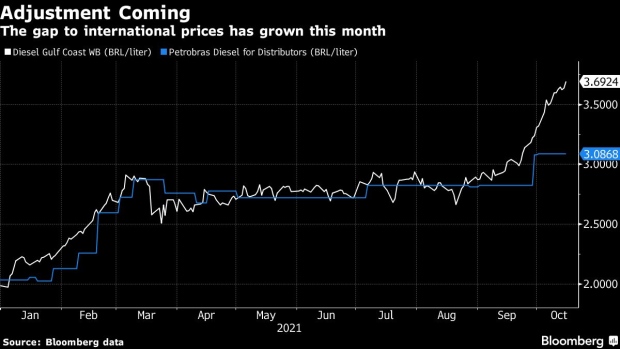 Oil truck drivers outside the Petrobras Reduc refinery during a strike in Duque de Caxias, Rio de Janeiro state, Brazil, on Thursday, Oct. 21, 2021. With global fuel demand still reeling from the pandemic and refineries shutting down elsewhere, Brazil is giving potential buyers another reason for pause: Petrobras is under mounting pressure to sell cheaper gasoline and diesel. , Bloomberg

Investors have been concerned that Brazil will force Petrobras to start subsidizing fuel to contain inflation ahead of presidential elections next year. Bolsonaro, who was speaking to reporters Sunday at an event broadcast live on Facebook, also said that Brazil wouldn’t have any fuel shortages like what recently happened in the U.K.

“Some want me to interfere in the price,” said Bolsonaro, who recently suggested privatizing Petrobras. “We’ve done this in the past and it didn’t turn out well.”

Brazilian markets suffered a rout last week on fears that Bolsonaro will ramp up social spending and fuel inflation in Latin America’s largest economy. His plans to boost welfare spending will break a key fiscal rule seen as essential to keeping investor confidence in the country.

While many Brazilians would clearly benefit from additional pandemic assistance, the spending plan risks backfiring by deepening a surge in inflation that would only weaken the country’s tepid economic recovery.

Economy Minister Paulo Guedes, who accompanied Bolsonaro on Sunday, said that privatizations, tax reform and a reform to public administration would help compensate for the increased social spending, which he described as necessary to help economically-vulnerably Brazilians through the pandemic.