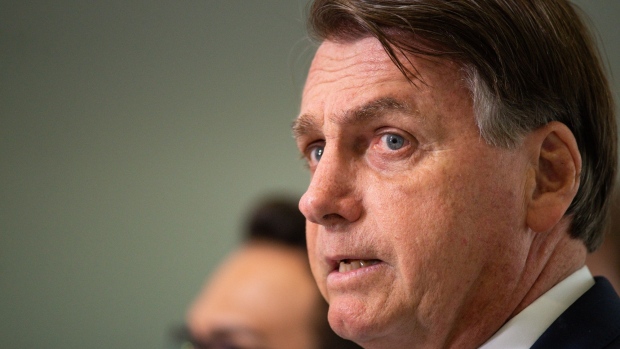 Jair Bolsonaro, Brazil's president, speaks during a news conference at the Planalto Palace in Brasilia, Brazil, on Wednesday, March 31, 2021. Commanders of Brazil's army, navy and air force were fired on Tuesday after Bolsonaro dismissed his defense chief as part of a broader cabinet restructuring. , Bloomberg

(Bloomberg) -- President Jair Bolsonaro further toned down his rhetoric in an interview with a weekly Brazilian magazine, dismissing concerns that he wouldn’t accept a possible defeat in next year’s election and promising fiscal restraint in the run-up to the vote.

There’s no more reason to doubt the country’s electronic ballot system now that the military will be involved in the process, the president told Veja magazine, adding that there’s “zero chance” he would seek a coup to remain in power.

Bolsonaro has been moderating criticism of the country’s electoral authorities and the top court after it reached a boiling point during the Sept. 7 pro-government acts. In a note published on Sept. 9, the conservative president said he never intended to attack other branches of power and that some of his remarks were made “in the heat of the moment.”

In the Veja interview, Bolsonaro also underscored his respect for the country’s public spending rules and acknowledged that the cost of living has been increasing too much. Yet he blamed the country’s economic problems on restrictive measures imposed by governors during the pandemic and said the central bank has autonomy to decide on interest rates and the currency.

Brazilian lawmaker Eduardo Bolsonaro, son of President Jair Bolsonaro, says on Twitter he was diagnosed with Covid-19 after taking the first dose of Pfizer’s vaccine.

The president himself is in isolation in Brasilia after his health chief Marcelo Queiroga was diagnosed with the virus in New York, where he was part of Brazil’s delegation to the United Nations. He will be submitted to a Covid-19 test on Saturday. Bolsonaro was coughing during his weekly live broadcast on social media on Thursday.