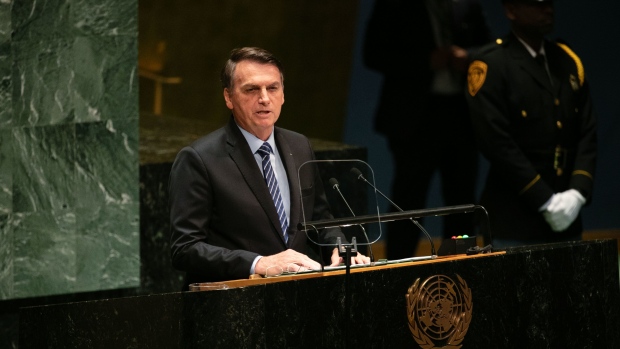 (Bloomberg) -- President Jair Bolsonaro struck a relatively moderate tone at the United Nations General Assembly in a bid to improve Brazil’s image abroad amid widespread criticism of his government’s environmental policies and erratic handling of the pandemic.

In a speech that kicked off the annual gathering on Tuesday, the conservative leader highlighted efforts to open the Brazilian economy to foreign investment, defending his environmental policies and his track record during the pandemic.

Bolsonaro, who has so far refused to receive a shot against Covid-19, said his government supports the vaccination campaign on a voluntary basis.

“We are against vaccine passports as well as any obligation related to vaccines,” he said, repeating that restrictive measures adopted by governors during the pandemic were to blame for the country’s high unemployment and inflation rates.

At home, Bolsonaro’s popularity is at record lows as a senate committee investigates whether he was negligent in the purchase of Covid-19 vaccines, delaying the beginning of the country’s immunization campaign. About 70% of Brazilians have received a first dose of anti-Covid shots but less than 40% are fully vaccinated.

He has also faced broad condemnation over lax policies to protect the Amazon as well as his behavior during the pandemic, including his touting of unproven medication against the coronavirus.

In New York, he was bashed by Mayor Bill de Blasio for not being vaccinated, and more than once was met with a small but noisy group of demonstrators. Some of the them, who temporarily blocked the president’s van from leaving a dinner, were described by Bolsonaro as “a pack of brainless people who don’t even know what they are talking about.”