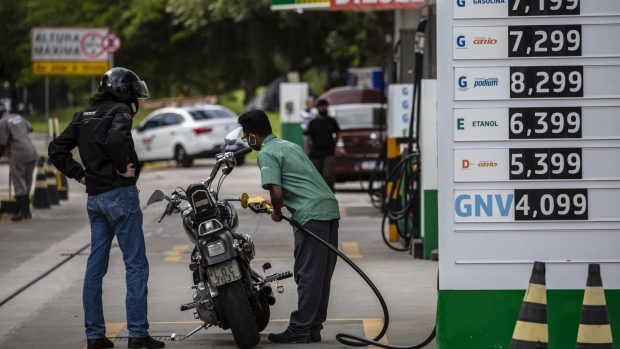 (Bloomberg) -- Jair Bolsonaro’s decision to fire a third chief executive officer at Petroleo Brasileiro SA shows just how crucial it is for the Brazilian president to avoid another increase in fuel prices that could all but kill his re-election chances in October.

Inflation running above 12% a year has become Bolsonaro’s main headache during the race led by leftist former President Luiz Inacio Lula da Silva. While prices of everything from food to health care are going up, fuel has become disproportionately more expensive since state-owned Petrobras boosted diesel costs by about 35% since March -- enraging Brazilians in general and, in particular, truck drivers who have since been threatening a nationwide strike.

“Voters know Petrobras is controlled by the government and that is having a strong impact on Bolsonaro,” said Carolina Botelho, a political scientist with Mackenzie University in Rio de Janeiro. “That’s why he’s making those changes at Petrobras, to make it look like life will get better for Brazilians.”

Voter intention for the right-wing president, who had been closing in on Lula, has stabilized at 32% in the latest Ipespe poll carried out between May 16-18, still 14 percentage points behind the front-runner. The same survey showed more Brazilians blame soaring fuel costs on the incumbent than on Russia’s invasion of Ukraine. And 64% of them expect prices to keep rising in the next few months.

Bolsonaro’s decision to replace the head of Petrobras, described by local newspaper O Estado de S. Paulo as the first step before changing the company’s board and its pricing policy, is just the latest of a series of unusual measures being implemented or considered by the president to ease inflation in the run-up to general elections.

The economy ministry on Monday announced a unilateral 10% reduction in import tariffs for a series of food and construction material items, without consulting members of the Mercosur trade bloc that also includes Argentina, Paraguay, Uruguay.

The government has already cut fuel taxes and is now seeking to pass legislation that would limit at 17% a value-added levy known as ICMS that’s imposed by states on a series of goods and services. The bill proposing such a limit, which faces the opposition of state governors, is expected to go to a vote on the floor of the lower house this week, before heading to the senate. Some states such as Rio de Janeiro currently slap a 34% ICMS duty on gasoline sales.

The bill’s approval would reduce this year’s inflation by about 1 percentage point, according to JPMorgan Chase & Co. That would be just a temporary relief for the central bank, which has already raised borrowing costs by 10.75 percentage points since last year, taking its key interest rate to 12.75%. Roberto Campos Neto, the bank’s president, has said Brazil has suffered the largest energy shock among key emerging market countries since the pandemic started.

“Those measures may provide some mild short-term relief on key prices. For fuel, they may postpone a long overdue price hike,” said Adriana Dupita, a Brazil economist with Bloomberg Economics. “However, they don’t remedy the issue of hot and widespread inflation or the prospect of slow disinflation.”

Economy Minister Paulo Guedes has so far staved off pressure to bankroll fuel subsidies by supporting the changes at the helm of Petrobras and defending the idea that it should adjust its prices less frequently.

“Petrobras’s new CEO needs to say if prices will stop rising and if there’s a risk of fuel shortages,” said Wallace Landim, one of the leaders of a massive trucker strike that paralyzed Brazil in 2018. “This pricing policy by Petrobras is crushing the middle class and leaving the poorest even poorer.”