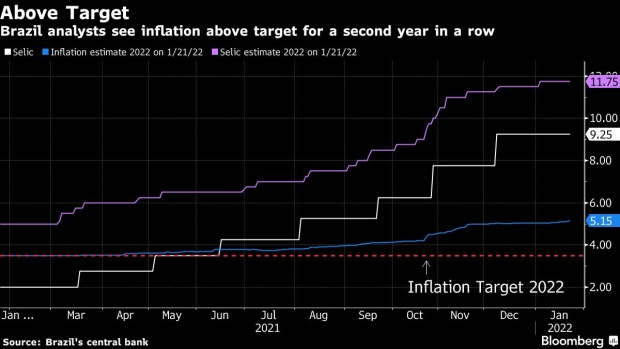 (Bloomberg) -- President Jair Bolsonaro kept funds to increase salaries for some public servants in this year’s budget, as growing concerns about government spending ahead of the October election drive investors to revise up their expectations for inflation.

Latin America’s largest economy is expected to end the year with a primary fiscal deficit of 79.3 billion reais ($14.55 billion), not taking into account interest payments, according to the 2022 budget Bolsonaro signed into law on Monday. The plan sets aside 1.7 billion reais to raise salaries, far from enough to contemplate all public servants. Bolsonaro had initially promised pay increases for federal police, but several other public workers, including central bank and customs officials, have threatened to go on strike if they don’t get the same treatment.

Brazil’s public spending remains a key concern for investors, increasing the perception of fiscal risk in a government already burdened by a large payroll and a sizable cash transfer program to support the poor during the pandemic. It’s also complicating the central bank’s mission to bring inflation to target, even as policy makers led by Roberto Campos Neto are likely to extend last year’s aggressive monetary tightening campaign with a third consecutive interest rate hike of 150 basis points next week.

Inflation expectations for 2022 not only remained above the 3.5% goal, but have gone up for a second consecutive week and reached 5.15%, according to a central bank survey released Monday. Economists polled by the bank see consumer prices rising 3.4% in 2023, also above the 3.25% goal for that year.

Bolsonaro vetoed in the budget 3.18 billion reais for projects in lawmakers’ home states to make sure the government will have money to comply with mandatory spending, a few days after announcing an initiative to reduce fuel and electricitdy taxes that may cost public coffers some 50 billion reais ($9.2 billion) in lost revenue.

Analysts at JPMorgan & Chase Co. said such a plan could reduce the inflation rate by 100 basis points this year but have a negative budget impact in the long run.

“The signal sent by the discussion is worrisome particularly because it significantly impacts fiscal accounts in a country that still needs to implement a fiscal adjustment to stabilize debt-to-GDP in the coming years,” economists Cassiana Fernandez and Cristiano Souza wrote in the report.