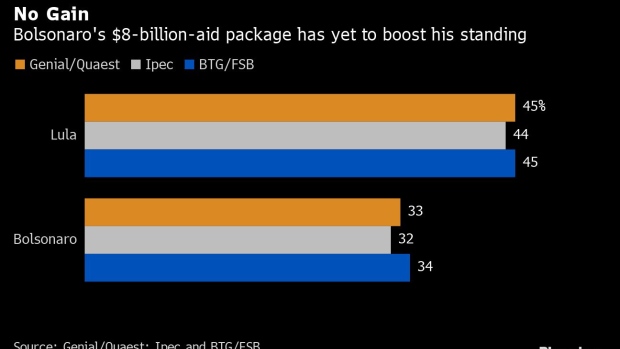 (Bloomberg) -- President Jair Bolsonaro poured big money into the Brazilian economy to improve his re-election chances. So far, it hasn’t paid off.

Opinion polls released this week show the incumbent behind his rival, former President Luiz Inacio Lula da Silva, by seven percentage points or more despite the passage of an aid package worth some 41.3 billion reais ($8 billion).

On Wednesday, a survey published by Quaest found Lula would win 45% of votes in the first round, while Bolsonaro would take 33%. Another one by PoderData showed Lula leading by seven percentage points. In each, both candidates climbed marginally from polls taken two weeks ago.

Such a gap is deflating hopes of a late-game comeback. The right-wing president is relying on measures including gasoline tax cuts and expanded cash subsidies to the poor to lift his popularity. He has been criticized for ringing up a bill that’s big enough to drag down the entire economy in the long-term.

The size of the package is “completely unprecedented in terms of what we’ve seen in past elections,” said Thomas Traumann, a political consultant and columnist.

Since Brazil’s top court tossed graft convictions against Lula last year and enabled him to run for a third term, the 76-year-old leftist leader has been the heavy favorite.

Drop in the Ocean

In recent weeks, Bolsonaro, 67, has combined executive action with the support of congressional allies to ease the pocketbook pain for common Brazilians. In his efforts to tame the soaring cost of living, he has taken particular aim at the price of fuel.

Still, the recent batch of surveys -- the first national measures of the president’s standing since aid began flowing last week -- suggest Lula’s lead isn’t narrowing as the Oct. 2 first-round vote approaches. On Monday, polls released by Ipec and FSB showed him ahead by 12 and 11 percentage points, respectively.

Part of the problem is that the election is largely viewed as a two-president race, and many Brazilians have already settled on their candidate. In that context, Bolsonaro’s recent efforts are ringing hollow, according to Felipe Nunes, the director of Quaest.

“Only the president’s voters say they believe he is taking steps to help people,” Nunes wrote on Twitter. The others say Bolsonaro “is simply looking for solutions that help his re-election.”

Even sectors that have traditionally supported the president are showing skepticism after months of searing inflationary pressures.

For instance, truckers are now receiving 1,000 reais a month in relief to help offset diesel costs. But Marlon Maues, head of the National Confederation of Autonomous Transporters, an industry group that represents the interests of some 850,000 drivers, described the aid as a “drop in the ocean” -- an amount that would only cover filling up a quarter tank on a rig.

To be sure, the official presidential campaigns only began on Tuesday. The economic measures appear to be having an effect as fuel prices are falling and inflation is starting to cool, both of which should help the Bolsonaro campaign.

“I expect the race to tighten,” Traumann said. “But there is a sense that their hand is played.”