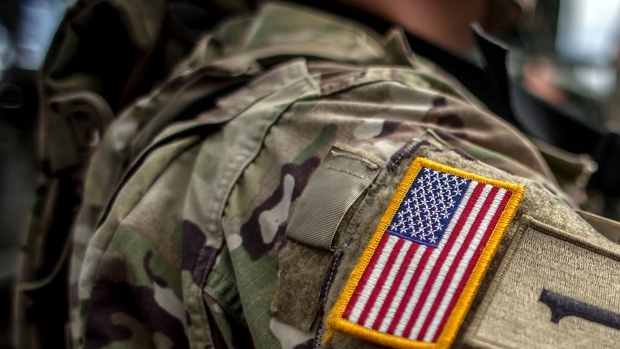 PRAGUE, CZECH REPUBLIC - MAY 27: A badge with flag of USA is placed on the sleeve of an U.S. soldier of the 2nd Cavalry Regiment of the US Army as he arrived with others at Czech army barracks on May 27, 2016 in Prague, Czech Republic. About 420 U.S. soldiers with 225 army vehicles are travelling in the 'Dragoon Ride II' convoy from Germany to Estonia where they will participate in the Saber Strike 16 exercise in the Baltic region. With this exercise, NATO shows cohesiveness and readiness of the involved countries to collective defense and future operations in Europe. (Photo by Matej Divizna/Getty Images) Photographer: Matej Divizna/Getty Images Europe , Photographer: Matej Divizna/Getty Images Europe

(Bloomberg) -- A convoy of U.S. troops was hit by a roadside bomb in Afghanistan’s province of Kandahar on Saturday, Reuters reports, citing a NATO spokesman and local officials.

An explosive device hit an armored U.S. military vehicle, according to the report referring to an unidentified senior Afghan military official. Details of possible casualties were not immediately known.

After the incident, foreign troops cordoned off the area, keeping Afghan forces away. The situation is being assessed, the NATO spokesman told Reuters, declining to give further details.

To contact the reporter on this story: Katharina Rosskopf in Frankfurt at krosskopf@bloomberg.net

To contact the editors responsible for this story: Katerina Petroff at kpetroff@bloomberg.net, Sid Verma, Joanna Ossinger