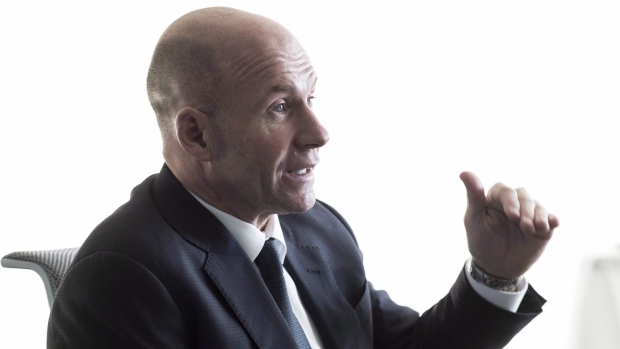 Bombardier president and CEO Alain Bellemare responds to a question during an interview with The Canadian Press in Mirabel, Que., on December 21, 2017. , THE CANADIAN PRESS/Paul Chiasson

MONTREAL -- The head of Bombardier Inc. says the continuation of its regional jet program hinges on whether the company can fill up the CRJ's partly blank order book.

"But it depends if we can fill up the backlog."

"We're assessing options as we speak, so we'll see where it goes," he said Tuesday.

The plain-and-train-maker's backlog of 54 CRJ 900 planes extends only through the end of next year, according to Bombardier.

Once a cash cow for the Montreal-based company, the CRJ now loses money, Bellemare has said. For the past five years Embraer SA's E175 narrow-body aircraft has dominated the U.S. market, where the majority of regional jets are sold.

Quebec's economy minister has said the government is prepared to work with Bombardier if it needs help with its regional jet program, though Premier Francois Legault has stated that likely won't involve financial support for the jetliner.

Bombardier is placing renewed focus on its business jets, whose robust sales and high earnings margin in 2018 propelled the company to its first annual profit in five years.

In July, the company sold a majority share of its CSeries commercial aircraft program to Europe's Airbus SE, which rebranded it the Airbus A220.