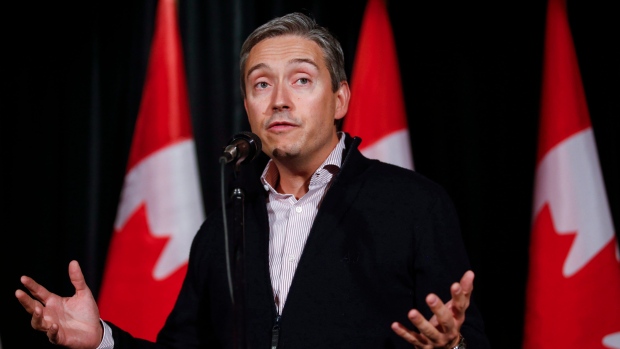 Francois-Philippe Champagne, Minister of International Trade, speaks to reporters at a Liberal cabinet retreat in Calgary , The Canadian Press

Canada's newly appointed Trade Minister Francois-Philippe Champagne said on Friday he has told Brazil he is open to resolving a feud over funding for jet maker Bombardier (BBDb.TO) without turning to the World Trade Organization.

Champagne told reporters he had discussed Bombardier with his Brazilian counterpart over dinner at the recent World Economic Forum in Davos.

While Canada would defend itself against any WTO action by Brazil over a $2.5 billion injection by the province of Quebec and its largest pension fund in Bombardier, Champagne suggested talking first.

"My comment was that of openness," he said on the sidelines of a Montreal Council on Foreign Relation event. "Litigation in my book has always been the last resort," he said.

"There might be another way other than litigation to look at the issues he was putting on the table with respect to Bombardier."

His comments echoed those of Brazilian Trade Minister Marcos Pereira, who said on Thursday that Canada had signaled it is willing to negotiate.

In December, Brazil said it would start proceedings against Canada at the WTO over what it calls unfair support.

Bombardier and Embraer have battled for decades over the regional jet market. The plane makers traded accusations of unfair subsidies in the late 1990s that their countries hashed out at the WTO.

Champagne took over as Canada's trade minister earlier this month from Chrystia Freeland, who became minister of foreign affairs.