Bombardier's train business may be easiest to sell: Andrew Willis

Bombardier Inc. floundered when it developed a plane to nip at the heels of Boeing Co. and Airbus SE. Now, as the company decides whether to bet its future on private jets or trains, the rail division faces a growing threat from another giant: China.

Competition from China Railway Rolling Stock Corp., the world’s largest maker of freight and passenger rail cars, is a key factor pushing Bombardier into talks to combine its train arm with Alstom SA. The French group has itself been challenged by CRRC’s move into high-speed trains.

CRRC’s ascent underscores the challenge for Bombardier as it considers selling one of its two main businesses in the face of more than $10 billion in debt. The rail arm risks losing out if it doesn’t bulk up. But with an Alstom combination likely to face antitrust hurdles, the embattled manufacturer is also exploring the sale of its corporate-jet operation to Textron Inc., maker of Cessna planes.

“The Chinese keep trying again and again and it is a question of time when they will be successful with further contracts in Europe,” said Maria Leenen, founder of SCI Verkehr, a consultancy based in Hamburg, Germany.

Bombardier, which got its start building snowmobiles in Quebec in the 1930s, is facing trouble on multiple fronts. The company is in advanced talks to sell its remaining take in Airbus SE’s A220 program to the European aerospace giant, according to people familiar with the matter.

A deal could relieve the Montreal-based firm of $350 million in ramp-up costs but it’s unlikely to provide it with significant funds to make a dent in its debt load, said George Ferguson, an analyst at Bloomberg Intelligence. The company sunk more than $6 billion into developing the A220, originally called the C Series, before ceding majority control of the program to Airbus in 2018.

Bombardier Transportation, the company’s Berlin-based train unit, has also been hit by $1 billion in penalties from customers due to technical meltdowns and delivery delays on contracts from New York to London.

State-owned CRRC was formed from a merger of northern and southern train makers in 2015 and its rail revenue is two-and-a-half times that of its nearest rival. The Bejing-based company is now moving beyond its home market to win “some significant contracts” in the U.S. while seeking to expand its presence in Europe, said Dan Fong, an analyst at Veritas Investment Research in Toronto.

The company established a manufacturing bridgehead in the region last year with the purchase of German locomotive manufacturer Vossloh AG. The deal included a factory in Kiel, Germany, that could be developed to target passenger-train contracts. 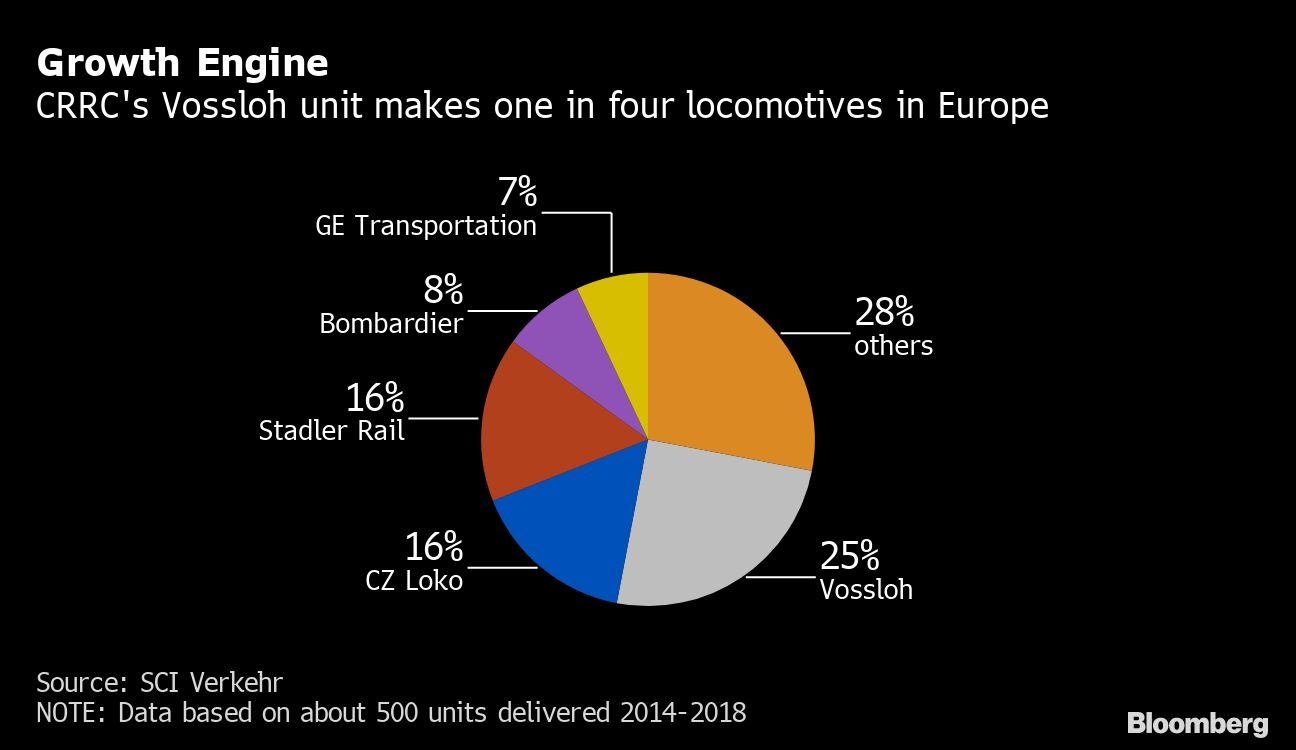 CRRC has already won billions of dollars of work in Boston, Chicago, Los Angeles and Philadelphia. In Chicago, its $1.3 billion bid for 846 railcars was $226 million less than the offer from Bombardier. And it’s moved into Australia, Cambodia, Colombia and Brazil.

At the same time, Bombardier has partnered with CRRC on projects in China and elsewhere. “China is one of the largest foreign investors in places not very familiar to Canada and some of the key emerging markets,” Guillaume Bouthillier, head of global partnerships at Bombardier Transportation, said at an event in Toronto last month.

Should a combination between Bombardier and Alstom go ahead, the new business would have annual rail sales of more than 15 billion euros (US$16.5 billion), ranking No. 2 worldwide, according to SCI Verkehr. That’s well behind CRRC but comfortably ahead of Siemens AG and Hitachi.

There is “a legitimate rationale for consolidating some of the western countries companies to better compete,” Fong said.

Gaining regulatory clearance would be a major issue. A merged business would have a near 50% share of the market for electric multiple units and a leading position in Europe’s urban transport market, according to SCI’s Leenen, who predicts that European Union antitrust regulators would block a merger.

Talks on a Bombardier-Alstom tie-up, which Bloomberg reported on Jan. 22, are ongoing, according to a person with knowledge of the matter. Bombardier management is still discussing the details of the transaction and debating whether to proceed, the person said.

A representative for Bombardier declined to comment on the possibility of a deal at the rail or jet unit or the rise of China.

The EU already nixed a deal between Alstom and the rail arm of Germany’s Siemens AG, with which the Canadian company had previously held talks, ruling it would undermine competition in signaling and high-speed trains.

Still, analysts say Bombardier will need to sell off trains or business jets to get a grip on its debt. The company reports fourth quarter earnings on Feb. 13.

“Bombardier’s only option to dig itself out from under the weight of its debt is to monetize one of its two remaining businesses,” said Cameron Doerksen, an analyst at National Bank of Canada in New York.

Ferguson at BI puts the enterprise value of the train unit at $5 billion to $6 billion and figures a sale of its business-jet segment could fetch $4 billion to $5 billion, according to a Feb. 5 report.

Talks have been going on with Textron for several weeks, the Wall Street Journal reported Feb. 4. But offloading the rail unit might be preferable because of the greater number of possible buyers, and the fact that it is based in Berlin with the bulk of operations in Europe, making a sale less politically sensitive in Canada, Doerksen said.

The business-jets arm, which has assembly plants in Montreal and Toronto, as well as Wichita, Kansas, has become Bombardier’s main direct employer in Canada since its deal with Airbus on the A220.

Doerksen said an Alstom tie-up may not be Bombardier’s only option. “They might go back to the drawing board with Siemens as well.”

Meanwhile, Bombardier may have some smoothing over to do with its train customers around the world after its recent execution issues. Deutsche Bahn AG of Germany, the world’s biggest rail operator, recently refused delivery of 25 trains worth US$440 million.

--With assistance from Myriam Balezou, Aaron Kirchfeld and Richard Weiss.