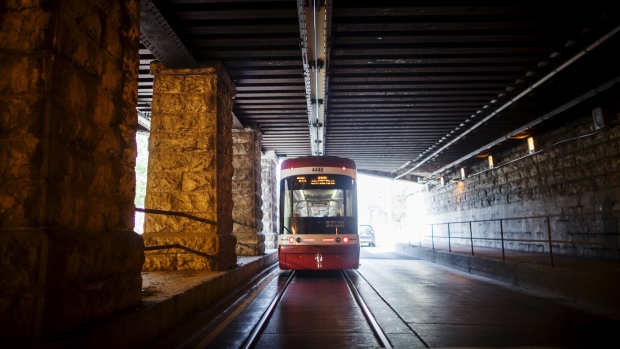 Metrolinx plans to impose financial penalties on Bombardier Inc. after the Quebec train maker delivered only half of a promised six vehicles for Toronto's Eglinton Crosstown LRT by the Friday deadline.

"Our contract clearly outlines financial penalties on Bombardier for delivering vehicles late. Metrolinx will enforce the contract and the financial penalties will be applied," Phil Verster, chief executive of the provincial transportation agency, told The Canadian Press in a statement.

The Montreal-based company was supposed to supply the first six of 76 cars to a Metrolinx facility by Feb. 1, according to a $392-million contract signed in 2017.

"The three remaining LRT cars are expected "over the course of the next couple of weeks," Verster said.

"While Bombardier's delivery times have improved, we are holding them to account, to protect the interests of riders and taxpayers."

A Metrolinx spokesman declined to specify the financial penalties.

Bombardier, which declined to comment, told The Canadian Press on Jan. 25 it was expecting "four more cars to be delivered...over the next week or so," with two of the light-rail vehicles already delivered from its Kingston facility at that time.

Difficulties have plagued the vehicle order tied to the $5.3-billion light rail line now under construction along and underneath Toronto's Eglinton Avenue, with legal battles leading to a reduced car order in 2017.

Last month, three large public transit agencies opted to stop taking trains from the company until it fixes the ones already in service.

Swiss Federal Railways cited doors that don't close properly, putting the brakes on deliveries under its US$1.9-billion contract for 62 trains.

On Thursday, the French National Railway Company announced it would stop train car deliveries, pointing to an "unacceptable situation of non-quality" with some of the 32 trains it had received, adding that 42 were supposed to have arrived by the start of the year.

Editor's note: An earlier version of this story erroneously reported that Metrolinx's Eglinton Crosstown LRT project had a budget of $5.9 billion. In fact, Metrolinx has stated the project's budget is $5.3 billion.