Bombardier Inc. (BBDb.TO) backed away from its 2020 forecast a week after cutting its 2019 outlook, and said it would sell a Northern Ireland wing factory as the company extends a revamp to focus primarily on making luxury jets and trains.

The manufacturer is unable to reaffirm its financial targets for next year, and Chief Financial Officer John Di Bert said he couldn’t provide any additional “precision.” Bombardier also announced Thursday the formation of a new aerospace division that will oversee private aircraft and CRJ regional jets.

The cloudy outlook underscores the challenges still facing Chief Executive Officer Alain Bellemare, who began a five-year turnaround of the debt-laden company in 2015. While the planned divestiture in Belfast would further his overhaul of Bombardier, the potential sale would take a bite out of revenue -- and face uncertainty from Britain’s planned split from the European Union.

“We think it is going to take longer than we had previously thought to get the company to the targeted levels of cash flow and profitability,” Rob Stallard, an analyst at Vertical Research Partners, said in a note to clients as he cut the stock to hold from buy. “The decision to sell half of the aerostructures division, with no buyer lined up, also removes a considerable chunk of the projected future profits and cash flow.” 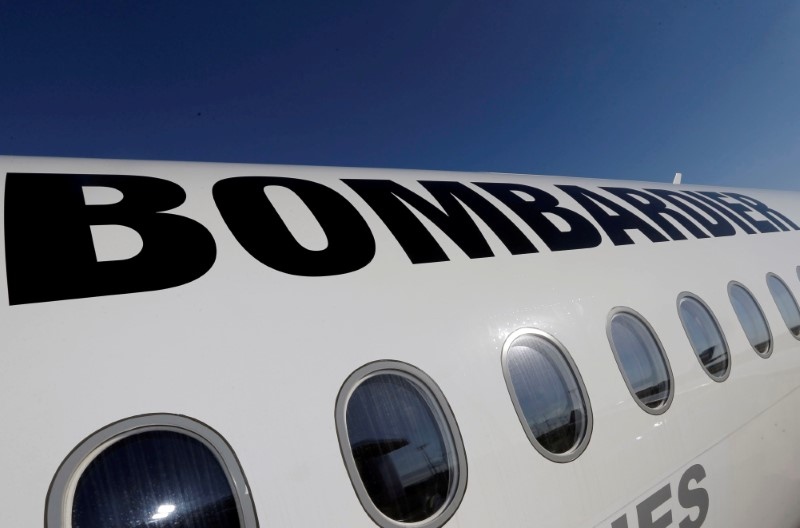 Do you think Bombardier should end its dual-class share structure?

Bombardier last year handed control of its C Series jetliner to Airbus SE, which Airbus renamed the A220. The Belfast factory makes wings for the single-aisle plane.

It still isn’t clear whether barriers will be erected between Northern Ireland and mainland Britain after a divorce. The exit has been postponed until Oct. 31, and a chaotic no-deal scenario that would snarl trade -- the worst-case for businesses -- hasn’t entirely been ruled out.

“The government will work with potential buyers to take this successful and ambitious business forward,” U.K. Business Secretary Greg Clark said in a statement about the Belfast plant.

Speaking to journalists after the annual meeting of shareholders in Montreal, Bellemare said the decision to sell the Belfast plant had nothing to do with Brexit, adding the company also employs 4,000 people on the train side in the U.K. and “loves” its presence there. The wing factory in Belfast has about 3,600 employees.

“This asset could benefit from having a company that would focus on aerostructure to grow because the potential in Belfast is very significant,” he said. “It’s a high-value business and we’re confident there will be lots of interested buyers.”

Bombardier wants to get the full value of the asset, adding it’s not a “fire-sale” situation, he said.

“Selling Belfast would further distance Bombardier from the A220,” JPMorgan Chase & Co. analyst Seth Seifman said in a note to clients. “This makes it a prized asset and with Airbus still ramping production of a young program, we imagine it will have an opinion about who owns this integral piece of it.”

Spirit said Wednesday that it was looking for acquisitions to diversify away from its dependence on Boeing Co. and the 737 Max, which has been grounded since March after two fatal crashes in five months.

“If Airbus does not want the asset itself, another possibility is Spirit AeroSystems,” Seifman said.

For all of the Belfast plant’s technological prowess, buyers will also need to assess its profitability, said George Ferguson, an analyst at Bloomberg Intelligence.

“We don’t see wing businesses as being very lucrative,” Ferguson said in an interview on BNN Bloomberg TV.

Belfast plant chief Michael Ryan told Bloomberg in November that he planned to look beyond Bombardier for growth as the company shrank its aerospace business, adding that all options would be considered, with “nothing out of the question.”

There are “no new workforce announcements as a result of this decision,” the Northern Ireland operation said.

Bombardier said it would also look to sell an aerostructures plant in Morocco.

A new division called Bombardier Aviation will oversee the Global, Challenger and Learjet private aircraft, the manufacturer said in a statement. Bombardier said the unit will also “maximize the value of its proven CRJ regional jets,” a business for which the company has been exploring strategic options.

The aviation business will be one of “two strong pillars” for the future, Bombardier said in the statement.

“This change reflects our strategic and discipline approach to simplify and better focus the company on the growth opportunities,” Bellemare said on the conference call.

Bombardier Aviation will retain a geographic footprint stretching from Montreal to Texas and Mexico. The division will be led by David Coleal, the head of Bombardier’s business-jet operations. Bombardier expects to close a sale of its turboprop operations this year.

The Montreal-based company burned through US$1.04 billion on a free cash flow basis in the first quarter, more than the expected outflow of US$947.2 million. Sales fell 13 per cent to US$3.52 billion. That fell short of the US$3.67 billion expected by analysts. The company swung to an adjusted net loss of US seven cents a share.

Bombardier last week cited challenges in its rail-equipment business as it pared its 2019 outlook for sales and profit.

Before effectively pulling its 2020 forecast, the company had targeted financial objectives including revenue of at least US$20 billion and free cash flow of US$750 million to US$1 billion.

Bellemare said it’s good to have a prudent approach on 2020 because of recent difficulties in the rail unit.

“There’s been some disappointment on our performance in the train sector, we acknowledge it” and it is being addressed, he said.