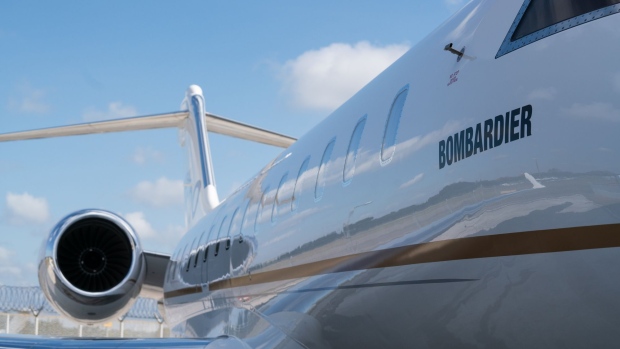 A Bombardier Inc. Global 6000 business jet stands on display during a media event at Seletar Aerospace Heights in Singapore, on Wednesday, Feb. 27, 2019. Bombardier is more than doubling the size of its bond buybacks to as much as $1.83 billion after raising twice the amount initially expected in its new debt sale on Thursday amid a red-hot junk-bond market. Photographer: Nicky Loh/Bloomberg , Bloomberg

The company says it received a letter April 22 from counsel to a holder of 2034 notes, claiming that its divestitures of non-core assets, including its transportation business, regional jet program and aerostructures division constitute a breach of certain covenants.

“The corporation believes that these allegations are without merit and that the corporation has not breached any covenant under the indenture,” Bombardier said in a statement Monday. “The corporation evaluated a range of options and determined that initiating the consent solicitations is the most expedient and efficient path to maintain value and protect the corporation and its stakeholders.”

If the amendments are adopted, Bombardier will make a consent payment of $1.25 per $1,000 principal amount for applicable series of notes, and C$1.25 per C$1,000 principal of Canadian dollar-denominated 7.35% debentures due 2026, according to the statement. The deadline for holders of the notes to agree is May 11 at 5pm New York time. Citigroup Global Markets Inc. and UBS Securities LLC will act as the solicitation agents.

In January, Bombardier completed the sale of its transportation business to Alstom, a deal that produced net proceeds of approximately $3.6 billion. The consent requires the approval of more than 50% in the case of the seven U.S. dollar issues, while the Canadian-dollar issue requires a two-thirds majority, a press officer for Bombardier said in an emailed reply to questions.