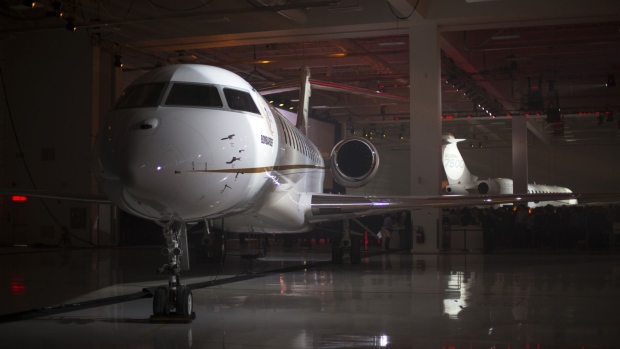 Bombardier Inc. Global 7500 luxury jets sits on display during a launch event in Montreal, Quebec, Canada, on Thursday, Dec. 20, 2018. Bombardier is hoping that sales of the jet will help it make its goal of US$8.5 billion in annual revenues by 2020. Photographer: Christinne Muschi/Bloomberg , Bloomberg

Bombardier Inc. is bracing for a drop of at least 30 per cent in sales of private jets -- the heart of its business -- as the coronavirus pandemic pummels demand.

The company’s business-aircraft division already suffered “a significant slowdown in order intake” in March, Bombardier said in a statement Thursday as it reported results. While the order book for the marquee Global 7500 is “largely intact,” the manufacturer is cutting spending and deferring discretionary investments to shore up profitability at lower production levels.

The weak demand outlook is raising the pressure on new Chief Executive Officer Eric Martel as the company exits its operations in commercial planes and rail equipment. Bombardier burned through US$1.6 billion of free cash flow in the first quarter, with as much as half of that coming from slow orders for planes and trains, temporary factory shutdowns and the inability to deliver aircraft amid government travel restrictions.

Bombardier tumbled 6.6 per cent to 50 cents at 11:51 a.m. in Toronto. The shares fell 73 per cent this year through Wednesday, the fourth-worst drop on Canada’s S&P/TSX Composite Index.

Business activity will hit a low point in the current quarter “before gradually recovering in the second half,” Bombardier said.

The company’s rail division, which is being sold to France’s Alstom SA, received a first-quarter equity injection of US$386 million from the Caisse de Depot et Placement du Quebec, a longtime investor. The sale to Alstom is proceeding well and is still expected to close in the first half of next year, Bombardier executives said on a call with analysts.

The sale of the CRJ regional-jet line to Mitsubishi Heavy Industries Ltd. will close June 1, Bombardier said, echoing a statement by the Japanese company. Bombardier already sold its stake in Airbus SE’s A220 jetliner program to the European planemaker. Bombardier invested more than $6 billion in developing the A220, which was originally known as the C Series.

Bombardier’s adjusted loss widened to 10 cents a share, worse than the seven-cent average shortfall expected by analysts. Sales climbed five per cent to US$3.69 billion.

Bombardier is in talks with countries where it has operations in case temporary liquidity needs arise, Martel said on the call. His first weeks on the job have been focused on managing costs and cash flow while talking to customers and suppliers to confirm orders and reset delivery schedules.

He outlined a set of priorities that include completing asset sales, becoming a more predictable company and aligning production with market demand to generate a steadier cash flow. He also pledged to define a “clear vision” for the company.

Martel, who used to head the business jets division before leaving Bombardier for a few years to head Canada’s biggest electric utility, Hydro-Quebec, said he hasn’t seen many order cancellations so far. That’s a contrast with December 2014, when cancellations started piling up after oil prices collapsed, he said.

“It is moving at a slow pace, there’s no decision being made,” Martel said, adding that customers have asked for information on plane availability and timing as they assess the duration and impact of the pandemic. “We think that when we have more visibility on the pandemic that the activity level will be restarting.”

The Montreal-based company, which suspended its financial forecast in March, said it would offer updated projections when it has greater visibility on the pandemic’s impact.

“We have limited exposure today on the light jet versus either 2008 or even 2014,” he said. “We always felt going into those crises that the large-segment market was much more robust. And today, as you know, we are much more dependent on that segment, which makes me believe that our backlog will remain much more solid.”