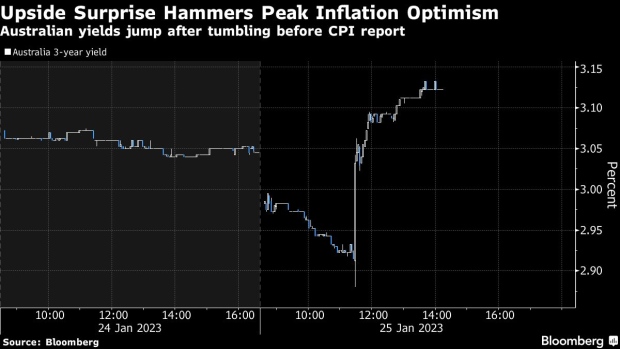 (Bloomberg) -- Bond bulls betting on a policy pivot just got a reality check after data from two major economies suggested that inflation has yet to peak.

Three-year Australian sovereign yields jumped as much as 11 basis points to 3.15% after the nation’s consumer price growth quickened to a 32-year high last quarter. The rate on two-year New Zealand notes pared a drop of as much as 12 basis points following the data.

Bond traders across the globe are ratcheting up wagers that inflation has peaked as oil prices cool and supply-chain bottlenecks ease. This risks putting them on a collision course with policy makers who have warned that the hiking cycle isn’t over given that price pressures remain elevated.

“Rates markets were really underpricing the policy path for the RBA and looking for a pause way too soon,” said Kellie Wood, a fixed-income money manager at Schroders Plc in Sydney. “We had moved back to short front-end rates over the last few days to position for this upside surprise.”

Australia’s yields had earlier tumbled as low as 2.88% as traders positioned for a weaker CPI print that’d back the case for rates to stay on hold next month. Government bonds posted the best start to a year on record heading into the inflation data.

The terminal rate seen in later-dated swaps is about 3.7%, which Wood said may be too low. Schroders’ modeling calls for a 4% policy rate, given that Australian inflation is likely to hit its high about six months later than in most other parts of the world, she said.

In New Zealand, official data on Wednesday showed price growth held near a three-decade high in the fourth quarter. Annual inflation was 7.2%, exceeding economists’ forecast of 7.1%, but below the Reserve Bank of New Zealand’s 7.5% projection.

--With assistance from Aline Oyamada.