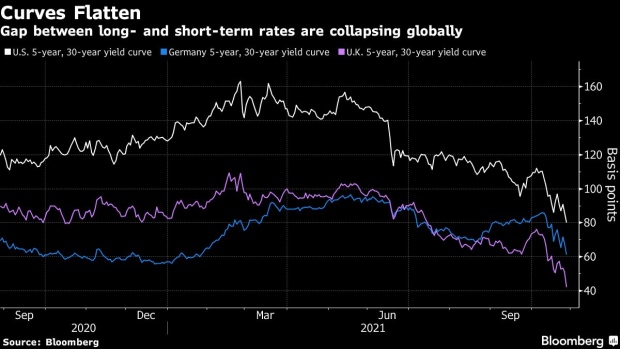 (Bloomberg) -- The collapse in the global sovereign-debt yield curve accelerated Wednesday, sending a foreboding signal to central banks about a slowdown in economic growth.

The narrowing gap between short- and long-term yields -- which has been fueled by central banks removing accommodative policies or getting ready to do so -- gained momentum with U.K. 30-year rates sinking the most since March 2020 as the nation cut issuance plans and yields on similar maturity U.S. Treasuries falling as much as 11 basis points. Elsewhere, the Bank of Canada abruptly ended its bond-buying stimulus program, Australian inflation figures stirred talk of tighter monetary policy and the German government cut its growth outlook as a result of supply-chain squeezes.

That all set off a major move in the world’s bond markets, where traders have been ratcheting up the outlook for policy tightening. The shift may be reinforced by meetings of Brazil’s central bank late Wednesday and Europe’s on Thursday.

“Big picture, investors are having to face the prospect of significantly more hawkish central banks dealing with a massive rise in cost-push inflation and subsequently inflation expectations,” said James Athey, investment director at Aberdeen Asset Management. “Central banks started a fire, then poured gasoline on it. Now they need to deal with it.”

The rally Wednesday drove yields on 30-year U.S. Treasuries below 2% for the first time in a month with the biggest decline since July. That narrowed the gap with five-year yields to as little as about 78 basis points, a level last seen in March 2020.

Peter Boockvar, chief investment officer for Bleakley Advisory Group, was especially struck by the Bank of Canada move. That “was not expected and reminds us all that monetary tightening is a global trend right now,” he wrote in a note.

Traders have globally been ramping up the outlook for policy tightening. Following the Reserve Bank of New Zealand’s hike at the start of October, markets are already pricing for a second hike at the November meeting as it faces pressure to take action in the face of surging consumer prices. And Brazil’s central bank may accelerate its pace with a 150 basis points of increases -- or more -- later Wednesday.

The lack of liquidity exacerbated the rate sell-off in smaller fixed-income markets in countries such as Australia, as investors scrambled to price in more aggressive central bank tightening, according to Aberdeen’s Athey. The three-year Australian yield jumped as much as 24 basis points to 1.01% after a government report showed core inflation surged to a six-year high. The yields on the April 2024 note soared to double the 0.1% level that Reserve Bank of Australia aims to target.

“Central banks are responding more aggressively to inflation,” said John Briggs, global head of desk strategy at NatWest Markets in Stamford, Connecticut. “So markets are pricing in central banks signaling the likelihood of higher rates, and so curves are flattening in response.”