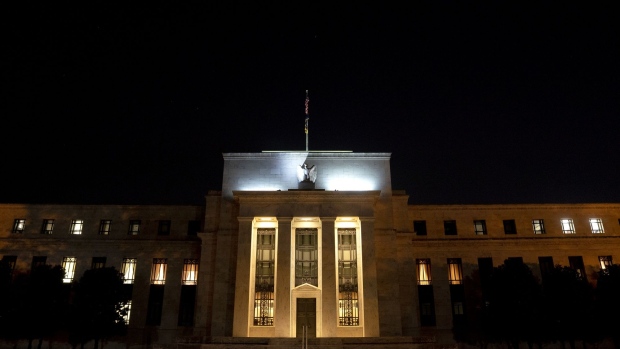 (Bloomberg) -- Treasury dealers and investors are busy trying to predict exactly when the Federal Reserve might pull the trigger on cutting the size of its balance sheet and how big that drawdown could be when it does.

The central bank is currently in the process of slowing its purchases of Treasuries and mortgage-backed securities with a view to halting fresh buying altogether. That’s on track for March, and expected to be followed by the first of a series of increases to the overnight policy rate.

The next step from there would be when it chooses to stop reinvesting the cash from existing holdings as they mature, thereby shrinking the balance sheet that’s been expanded over recent years in order to help market functioning and support the economy. With a number of variables at play, market observers have been piecing together their best guesses of how it might all pan out.

The last time the Fed undertook so-called quantitative tightening, from 2017 to 2019, it set monthly limits to how much it would allow to roll off without being replaced by other securities. They started at $6 billion per month for Treasuries and $4 billion for mortgage bonds and proceeded to raise those caps every three months until they hit $30 billion and $20 billion respectively, before phasing them out entirely in 2019 and allowing the balance sheet to start growing again.

At that time, the Fed had been raising rates for more than a year before it started QT. This time around, minutes of their deliberations show that officials are prepared to start shrinking the balance sheet soon after it starts raising rates, which money markets currently suggest will happen in March.

Most bond dealers expect any upcoming quantitative tightening to follow the same basic model of increasing caps, but there are differences about how it unfolds. Broadly, it’s expected to start as early as July and as late as August or September, and the combined monthly drawdown pace for Treasuries and mortgage bonds could ultimately reach $100 billion or more, according to a couple of observers.

The estimates matter because if the Fed -- whose purchases of notes and bonds are structured as add-ons to Treasury auctions -- buys smaller quantities, the size of sales to the public may need to grow. The Treasury Department queried dealers about this in a quarterly survey this month.

Following is a summary of some of their views on the possible path for QT:

Estimates for how quickly the Fed will progress from the initial caps to peak caps follow. The impact of the expected reductions on the size of the Fed’s balance sheet is complicated by the roughly $325 billion of Treasury bills it holds. In general, dealers expect that the Fed will allow the bills to run off without counting them against a cap.