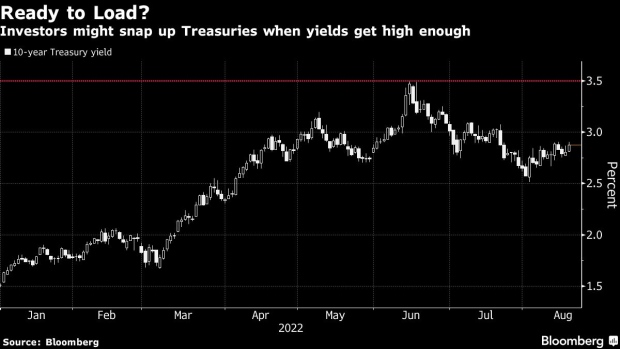 (Bloomberg) -- After months of heightened market volatility that savaged the performance of bond funds, investors are focused on salvation.

With Federal Reserve officials beating the drum on their commitment to bringing down the highest inflation in decades, bond managers are relishing the prospect of another jump in Treasury yields that might allow them to get back in and put some of their billions of dollars in funds to work at higher rates. And they are particularly honed in on longer-dated Treasuries.

The rationale for getting into extended maturity Treasuries like the 10-year is that at some point, when “recession becomes apparent,” valuations will bounce back, said Steve Chiavarone, portfolio manager at Federated Hermes, which manages about $632 billion.

But before then, there’s a chance that yields could go a bit higher, at which point some investors are looking to lock in that higher running yield. And if yields do come back down subsequently -- meaning valuations are rising -- managers could also get the fillip of capital appreciation.

After a brief spike to 3.5% in mid-June, the 10-year Treasury benchmark has settled into a range of 2.5% to 3% over the past month. While that level of yield still lags the current annual rate of inflation, the benchmark has more than doubled from where it was trading a year ago at 1.25%, providing investors with a much better fixed return and some insurance against future turmoil in equities and credit.

“There is no question higher Treasury yields will slow the economy,” said Mark Kiesel, global credit chief investment officer at Pacific Investment Management Co. A 10-year yield near 3.5% “is a big buying opportunity for the bond market,” in his view.

The 10-year rate took another leg higher Wednesday as Treasuries sold off across the curve, climbing as much as 10 basis points to more than 2.90% in the wake of moves in the UK market. An auction of 20-year debt on Wednesday reinforced the trend for a tenor that has historically received softer demand than older benchmarks like the 10- and 30-year securities.

An important question is how much further long-dated yields will rise as the Fed delivers further tightening that could well push the central bank’s policy interest rate up to 3.5%, and perhaps even 4%, by the end of the year. The Fed is also expected to pick up the pace of shrinking its $8.9 trillion balance sheet in September.

How long before the Fed brings inflation down to its 2% target? Share your thoughts on inflation through the latest MLIV Pulse survey.

Typically, Treasury yields across the curve follow the bank policy rate higher, led by the policy-sensitive two-year yield. Against that prospect, bond investors are weighing the fact that more tightening enacted by the central bank entails a better chance that inflation comes down, while the threat of a recession increases. Until those outcomes emerge, further Fed tightening may push 10-year yields closer to their recent peak.

“We’re waiting to see those mid-June yield levels again. If we get there it’s time to load up the boat,” said Kiesel.

A replay of a spike in yields is by no means out of the question as investors wait for the release of more economic data and how policy officials respond. The publication on Wednesday of minutes for the Fed’s July policy meeting were viewed by traders as marginally less hawkish than anticipated, with officials saying “it likely would become appropriate at some point to slow the pace of policy rate increases.” Still, in the wake of last month’s meeting, central bank officials have said there will be further hikes into 2023, although the market continues to price in some expectation of a pullback from the peak later next year.

There does remain reason for caution in terms of going all in on 10-year Treasuries, namely the prospect that inflation proves a lot stickier.

“Inflation needs to fall, but it will be mathematically difficult for it to fall quickly enough for the Fed to change its aggressive policy tightening path,” said Bill Merz, a Minneapolis-based director of fixed income at U.S. Bank Wealth Management.

For now, the funds Merz manages are “very, very slightly underweight duration in our reference portfolio allocations,” he said. “We face two-sided risk in the rates market.”

More insights on the Fed’s policy intentions will arrive later this month when its chair, Jerome Powell, is expected to speak at the Kansas City branch’s annual symposium in Jackson Hole, Wyoming. Heightened Fed hawkishness arouses concern of a policy error and has some managers willing to buy into any additional Treasury weakness.

“We have been adding interest-rate risk to the portfolio, mainly in the 7- to 10-year area, with some in the long-end along with more credit exposure,” said Rick Rieder, chief investment officer of global fixed income at BlackRock Inc.

BlackRock is positioning for a decline in the 10-year yield volatility and has been selling options on that view, said Rieder.

Yet no matter what direction longer-dated Treasuries take one thing has become apparent.

“Bonds finally offer yield,” said Lisa Hornby, head of US multi-sector fixed income at Schroders. “It doesn’t mean that we are at peak yields or that spreads can’t go a bit wider -- they certainly can.”