Probability of a recession just went up: Ed Devlin

For all the volatility whipsawing the US bond market, traders are showing increasing confidence that the alarm bells warning of a recession will only get louder.

The jump in consumer prices in June by another four-decade high reinforced the near-certainty that the Federal Reserve will keep tightening monetary policy aggressively, with markets placing mounting odds on a full-percentage-point hike this month. That would be the biggest increase since the Fed started directly using the overnight rate to conduct monetary policy in 1990s, raising the risk that growth will stall as higher interest rates hit the economy.

The lengths the central bank is likely to go to tame inflation has left investors pouring into wagers on longer-term bonds, anticipating the securities will outperform if the nation lapses into a recession.

That was apparent Wednesday, when long-term Treasuries rallied in the wake of the consumer price index while short-term bonds slid. The diverging paths have driven 10-year yields as much as 28 basis points below 2-year ones, the most since 2000, in the wake of the dot-com stock bubble’s collapse.

“The Fed really has missed the ball on inflation and letting it get entrenched, so 100 basis points is definitely on the table,” said John Luke Tyner, portfolio manager at Aptus Capital Advisors, which oversees US$2 billion in assets. “The yield curve is probably telling us something serious now.” 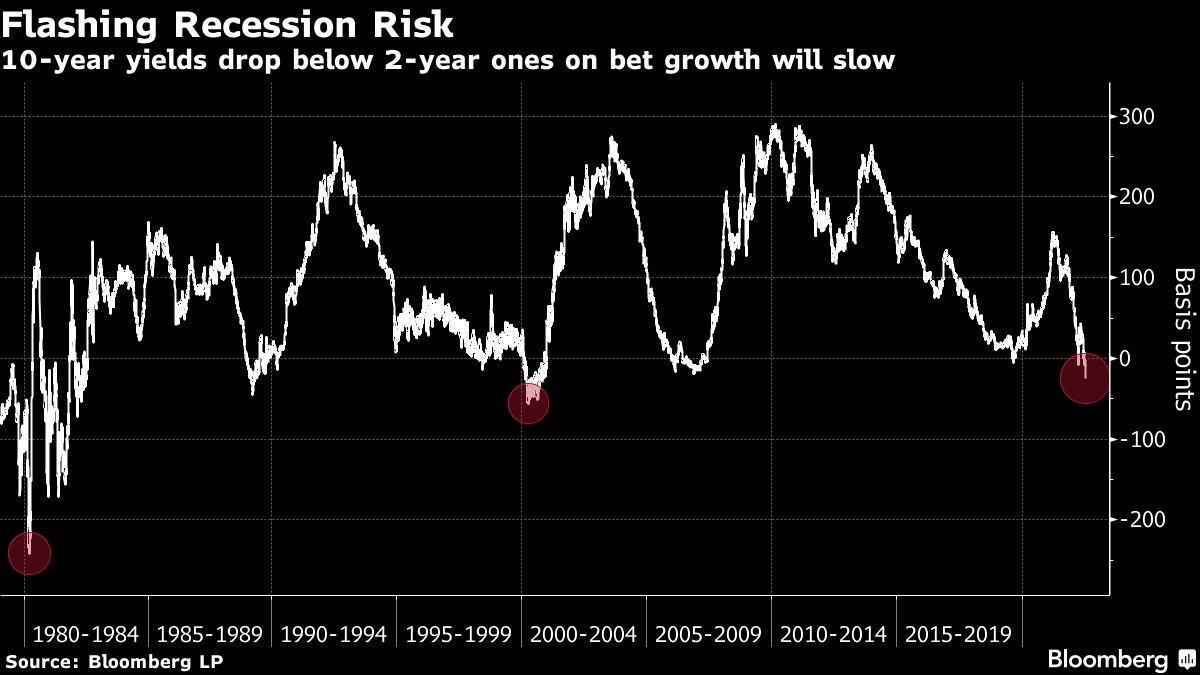 There was some tempering of the inversion trade on Thursday, when the 10-year yield moved back to within 17 basis points of the two-year note after Fed Governor Christopher Waller and St. Louis Fed President James Bullard both backed a three-quarter point hike this month. Waller said he could support more aggressive action if warranted by upcoming retail sales and housing data.

Before the latest inflation data, the bond market was already pricing in more than 60 basis points of rate cuts by the end of 2023 after the Fed’s benchmark peaked around 3.30 per cent. Markets have since repriced both ends of the equation, seeing the overnight rate peaking at 3.7 per cent in December, followed by more than 70 basis points of cuts next year.

The key question is whether the degree of the yield curve’s inversion will mirror 2000 or the much larger moves in the early 1980s, when the Fed’s efforts to rein in an inflationary surge set off back-to-back recessions. In 2000, 10-year yields dipped as much as 56 basis points below those on 2-year notes. In 1980, the gap widened to as much as minus 2.4 percentage points.

The scale of the move will depend on how far the Fed needs to push up its main rate. Swap prices reflect a consensus that the Fed will enact rate hikes of at least three-quarters of a percentage point in both July and September. Such contracts on Thursday dialled back expectations of a full-point increase this month, a step the Bank of Canada took on Wednesday.

“Central banks are kicking into a higher gear, and as growth slows the hope is that a policy mistake is not made,” said Mark Lindbloom, portfolio manager at Western Asset Management, referring to the risk that central banks overshoot and excessively slow growth. “As a bond manager we are forward-looking,” and if the economy does weaken from “central banks overdoing their tightening,” he said Western would increase its overweight position in 20- to 30-year Treasuries.

Such thinking was evident in the strong investor demand for a 30-year bond sale on Wednesday, when the securities were sold at a yield below the market level ahead of the sale. At the same time, bond-market proxies of expected inflation have tumbled, underscoring expectations for slower growth.

The five-year breakeven rate, representing bond traders’ expectation for the average CPI rate over the period, is hovering around 2.5 per cent, down from a record high of about 3.8 per cent in March. Given that the CPI historically has run about 40 basis points above the inflation metric the Fed targets -- the personal consumption expenditures price index -- breakevens signal the US central bank will be able to drive inflation back near its 2 per cent target, albeit at a considerable toll.

At the same time, Fed Chair Jerome Powell has promised to be nimble with monetary policy, so it’s possible policymakers could reverse course if price pressures ease and growth stalls.

“There is further flattening to go, but you have to be careful,” said  Western Asset’s Lindbloom. “You need to be aware that as stress builds, central banks will eventually ease, and that’s when the curve steepens.”

Quadratic’s Davis said the Fed should lean harder on the unwinding of its massive bond portfolio to tighten policy and also put some upward pressure on long-term rates, even by selling securities outright rather than just slowing reinvestment of maturing debt. That would help to re-steepen the yield curve, she said.

In the meantime, deeper inversion appears likely as the Fed scrambles to rein in inflation, which until recently it expected to moderate as economic conditions began to normalize after the pandemic shutdowns.

“As we continue to not see a peak inflation number, the sentiment and the expectations for future inflation just gets stronger and strong on the consumer side,” said Aptus Capital’s Tyner. “Powell will want to make sure that the message is known that he is taking this seriously. He’s made that clear over the last few months as he’s been more aggressive than expected, but I think that will continue.”