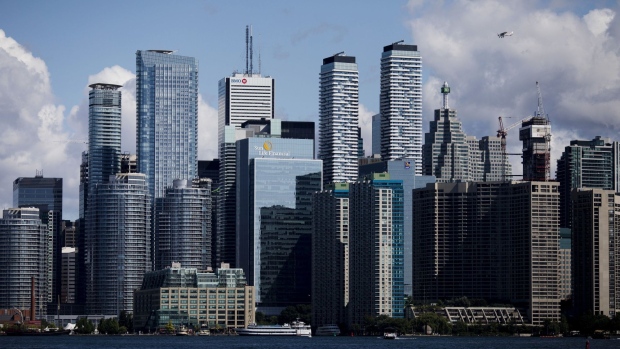 The Sun Life Financial Inc. headquarters, center, stands in Toronto, Ontario, Canada, on Saturday, Aug. 10, 2019. Sun Life reached its lowest ever coupon for any of its bonds with the issuance of its first sustainable notes in a fresh sign that demand for such debt is increasingly driven by general investors scratching for some yield above inflation. , Bloomberg

Canada’s bond buyers and issuers are mirroring the country’s prime minister by trying to get ahead of a potentially long, drawn-out drama surrounding the U.S. presidential election.

Corporate bond sales last week rose to C$3.57 billion up from C$1.85 billion and C$1.035 billion in the previous two weeks respectively, according to Bloomberg data. This week, Ontario Teachers’ Pension Plan Board hired banks for a potential seven-year bond while Russel Metals is selling the first Canadian-dollar denominated bond deal from a high-yield rated company since August, according to Bloomberg data.

Elections in the U.S. have been always a major event in Canada, as its southern neighbor is its largest trade and investment partner. Still, on this occasion Prime Minister Justin Trudeau’s government is bracing for potential “disruptions” should the outcome of the election not be immediately clear.

“There is a greater probability of surprises leading to this election. Besides, this is 2020, you cannot rule anything out,” said Brian Calder, a portfolio manager at Franklin Templeton Investments in Calgary. “There is the potential for additional volatility post election. So issuers may be working to get ahead of that.”

While financial markets have benefited from large backstops from central banks since late March, risk premiums in the Canadian-dollar corporate bond market rose to the highest in three months on Oct. 1 amid inconclusive talks in Washington about a fresh pandemic aid package. Since then, risk premiums have narrowed -- and market tone has improved -- partly because opinion polls are showing a widening gap between the two major candidates, said Imran Chaudhry, a senior portfolio manager at Fiera Capital Corp.

“The big risk is the elections are going to produce a result that it is not clear,” said Chaudhry. “Investors are definitively more cautious, a little more careful in terms of the risks that there could be around the corner after the election.”

Running ahead of the elections was among the factors taken into account before Stantec Inc., a design and engineering firm whose largest market is the U.S., went ahead with its inaugural bond deal earlier this month.

“We recognized that the closer we got to the election the more potential volatility in the markets,” said Theresa Jang, chief financial officer at Stantec, whose transaction was more than four times oversubscribed. That would “make it more difficult for us to achieve the spread that we are looking for.”

Russel Metals updated fixed-income investors last week after the redemption of its 6 per cent bonds due 2022. The company is today issuing a C$150 million of five-year bond that’s callable after two years, according to people familiar with the matter. The notes will be priced to yield 5.75 per cent compared to an earlier guidance at about 5.875 per cent.

“Part of me wonders if companies in Canada risk missing the ‘issuance train’ if they don’t come to market soon, given likely volatility before the U.S. elections,” said Dhruv Mallick, head of high-yield fixed income at Leith Wheeler Investment Counsel Ltd.