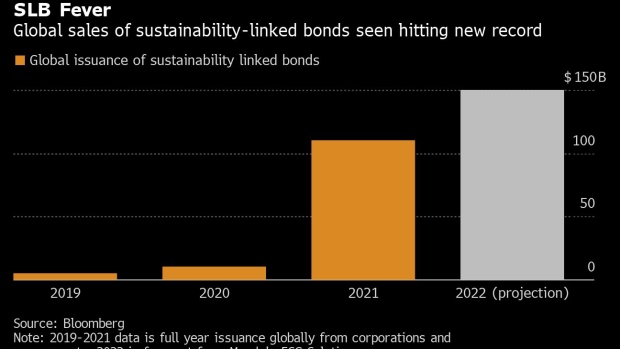 Offshore wind turbines at the Scroby Sands Wind Farm, operated by E.ON SE, near Great Yarmouth, UK, on Friday, May 13, 2022. The UK will introduce new laws for energy to enable a fast build out of renewables and nuclear power stations as set out in the government’s energy security strategy last month. Photographer: Chris Ratcliffe/Bloomberg , Bloomberg

(Bloomberg) -- Bond issuers are asking banks to help them win investor permission to convert old debt into a fast-growing and sometimes controversial type of ESG product.

The goal is to turn regular bonds into so-called sustainability-linked bonds. SLBs tie interest payments to a company’s environmental, social or governance performance, and come with triggers that give them meaningfully different profiles from conventional bonds. If successful, issuers would be able to apply an SLB structure to debt issued well before the first sustainability-linked bond hit markets in 2019.

“As we have seen with some recent greenification attempts, it’s not straightforward to motivate investors to support such an exercise, particularly when there’s no fee compensation,” said Arthur Krebbers, NatWest’s head of corporate climate and ESG capital markets. He’s part of a team that’s now helping firms explore SLB conversions.

Sustainability-linked bonds are a relatively new segment of the $5 trillion ESG debt market that’s been flooded with issuance in recent years. From 2020 to 2021, SLB sales grew almost tenfold before slowing this year as war and inflation pummeled most asset classes. Labeling debt “ESG” may help issuers gain access to a larger pool of buyers, as asset managers in the EU look for ways to meet sustainability standards that are being enshrined in regulations.

But SLBs have also attracted a good deal of criticism. Weak targets, tiny penalties and flexible terms have left some creditors cautious. In fact, a number of the world’s largest ESG bond investors refuse to touch SLBs, and even early backers have started voicing concerns that parts of the market risk losing credibility.

“The SLB market is one of those that’s definitely evolving,” said Caroline Haas, who leads NatWest’s climate ESG capital markets team. “We are still all trying to kind of find our feet in it.”

Part of the difficulty around SLBs relates to how well investors can track how close an issuer is to setting off a trigger and altering the payment profile, she said.

“It isn’t really flagged actively yet in the marketplace and that is actually going to be quite important because if the step-ups are not sufficient, then actually a significant part is the reputational impact,” she said.

“Investors should really ask serious questions when companies announce plans to add ESG labels to debt after issuance, as we’ve seen with real-estate companies’ ‘greenification’ of old debt,” said Remus Negoita, an analyst at Bloomberg Intelligence. “With SLBs there’s the additional headache of cashflows from the instrument potentially changing.”

Investors have got used to seeing conventional debt converted into green bonds. French real-estate company Covivio, for example, recently relabeled some of its old debt as green without first getting its bondholders’ formal permission. Such a conversion means that issuers commit to using the money they get from bond investors for environmental projects. But these promises aren’t legally enforceable in the same way as failure to pay a bond coupon would be.

Because an SLB conversion represents a significant change of a bond’s legal status, formal creditor consent will be required, Krebbers said. That means issuers will need to convince existing investors that it’s also in their interest to accept the conversion. NatWest is now working with some issuers to introduce a so-called consent solicitation, which asks investors for permission to change the terms and conditions of outstanding bonds.

For issuers, meanwhile, it’s all about adding an “ESG” tag to as much of their borrowing as possible, which allows them to build in new financial incentives for meeting targets.

“Some companies will look at this as way of accelerating the sort of percentage of their debt that are SLBs or just building out an SLB curve in a more inorganic way,” Krebbers said.