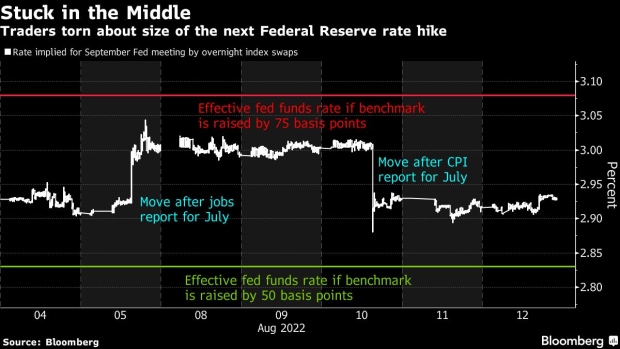 The Marriner S. Eccles Federal Reserve building in Washington, D.C., US, on Wednesday, July 6, 2022. The Federal Reserve will unveil details of what policy makers debated last month that may shed light on how they view the near-term path for interest rates amid surging inflation and signs of a slowing economy. , Bloomberg

(Bloomberg) -- Bond investors hoping for a summer lull have a problem: Next week could ratchet up market volatility at a time when wagers on the Federal Reserve’s next decision are near-evenly split.

There’s a standoff resulting from conflicting US economic data: strength in hiring and wage growth on the one hand, and the first glimmer of moderation in inflation from generational highs on the other. As recently as Aug. 5, another three-quarter point rate increase was deemed likelier based on strong jobs data. This week, a smaller half-point move came back into favor after inflation decelerated.

To avoid a potentially disorderly reaction to the Fed’s decision on Sept. 21, the market needs to reach a consensus -- and adjust pricing accordingly -- based on the latest economic data and comments by Fed officials. Next week, retail sales data may bring some clarity, revealing the extent to which ebbing inflation is helping consumers. The following week’s annual Fed confab in Jackson Hole, Wyoming, might also be decisive.

“A month and a half to the September meeting is an eternity for the bond market,” said Gregory Faranello, head of US rates trading and strategy for AmeriVet Securities. The debate over 50 versus 75 basis points “will continue as the Fed is following the data,” and that will “predominantly play out in the front-end.”

Also next week the Fed is scheduled to release the minutes of its July 27 meeting, at which it raised the target range for the federal funds rate by 75 basis points to 2.25%-2.5%. The swap contract referencing the September meeting by the end of this week priced in about 60 basis points of tightening, suggesting that a half-point hike is viewed as certain, with an additional quarter point given odds of about 40%.

To be sure, the deep division over a half-point vs a three-quarter-point hike may persist for weeks. Friday, Richmond Fed President Thomas Barkin said he was undecided on whether the Federal Open Market Committee should raise rates by 50 basis points or 75 basis points in September, with another month of employment and inflation data to come before the meeting. San Francisco Fed President Mary Daly the previous day predicted a half-point hike in September but said she was open to a larger move.

Fed officials’ larger point in the past week has been that the policy rate may need to remain at its destination level for longer than investors expect. The market for wagers on the fed funds rate is priced for it to peak at around 3.5% early next year, and decline by the end of 2023. Minneapolis Fed President Neel Kashkari, who prior to the pandemic was the central bank’s most dovish policy maker, said Wednesday that he wants the Fed’s benchmark interest rate at 3.9% by the end of this year and at 4.4% by the end of 2023.

However this week’s inflation data, beyond moving the needle back toward 50 basis points, priced in lower volatility in front-end rates. The moderation in rate volatility downgrades the worst-case scenario of mounting inflation, Fed aggression and eventual economic distress.

“Now we have a higher degree of certainty -- inflation seems to have peaked and we realize that the economy seems to break down when 10-year yields get to around 3.5% -- so we know it’s somewhere around there the Fed needs to get,” said Lisa Hornby, head of US multi-sector fixed income at Schroders.

It leaves Schroders and other bond investors keen to take advantage of any rise in Treasury yields toward 3.5%, and in the typically thin trading conditions of August and on the long road to the September policy decision, they might just have an opportunity to do so.

“We are not there yet, but that’s where rates -- Treasuries --- offer value,” said Hornby.