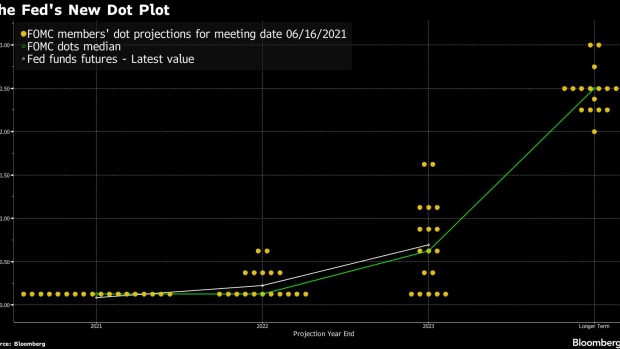 The Marriner S. Eccles Federal Reserve building in Washington, D.C., U.S., on Friday, Feb. 19, 2021. Federal Reserve officials in January expected it would be "some time" before conditions to scale back their massive bond purchases were met, leaving open the question of whether any tapering could start before 2022. Photographer: Samuel Corum/Bloomberg , Bloomberg

When long-term interest rates were surging earlier this year, Federal Reserve officials cheerfully interpreted the move as a vote of confidence in the U.S. economic outlook.

By the same logic, this month’s plunge in bond yields -- taking the rate on the 10-year Treasury note to as low as 1.25%, the lowest since February -- suggests investors may be having some second thoughts on the topic.

That doesn’t mean they’re expecting a bust: the economy is growing fast and forecasters are still relatively upbeat about growth in the second half of this year and into 2022. What appears to be happening instead is that bond investors are abandoning thoughts of a post-pandemic paradigm shift toward faster growth, and downplaying fears of runaway inflation -- at least for now.

No longer do they see continuous dollops of government money lifting longer-term growth to something closer to 3% than 2%. Nor do they see a rejiggered Federal Reserve monetary strategy succeeding in boosting inflation to its average 2% goal.

With expectations of further budget-busting fiscal packages fading and more hawkish rhetoric from the Fed, the bond market’s focus has shifted toward a slowdown in growth next year and beyond, as massive budgetary and monetary stimulus gets scaled back.

“It’s a back to the future, a snap-back to 2019,” when structural forces such as an aging workforce and a shortage of global demand constrained growth and inflation, said Nathan Sheets, a former Fed and Treasury Department official who is now PGIM Fixed Income chief economist.

Other factors are at play in the bond-market rally. Even with their recent steep decline, yields on U.S. Treasuries are well above those available on government debt in Europe and Japan, and thus remain attractive to foreign buyers.

Many market players also appear to have been caught off guard by the sudden shift in sentiment, forcing them to cut their losses and close their short positions, fueling the rise in prices.

And lurking in the background is the persistence of the pandemic and the risk that new, more dangerous strains of Covid-19 could set back the nascent global economic recovery.

Forecasting a U.S. slowdown next year is something of a no-brainer. Thanks to the unprecedented fiscal largesse and a full-scale reopening of the economy, growth this year is forecast to clock in at 6.6%, the second-best year since 1966, according to economists polled by Bloomberg. So some downshifting is to be expected, to a still healthy 4.1% in the Bloomberg survey.

But that doesn’t mean it won’t be noticeable.

“It’s like you’re in a car and fiscal and monetary policy are flat on the accelerator,” said Mark Zandi, chief economist at Moody’s Analytics. “If you take your foot off the accelerator -- even if you don’t put it on the brake -- it feels different. All of sudden you start to slow quite significantly.”

He worries that without another fiscal package, growth could dip to a 1.5% to 2% annual pace in the second half of next year, stemming the fall in unemployment and possibly even pushing it higher.

That would be bad news for President Joe Biden’s Democratic Party, which already confronts a tough task in retaining its slim hold on power in November 2022 congressional mid-term elections.

The shift in bond investors’ focus toward slower growth has also led to a transformation in the market meme surrounding the Fed.

Before, it was seen as potentially making a policy mistake by failing to raise interest rates fast enough to prevent a dangerous outbreak in inflation. Now, it’s also being faulted for having a too-twitchy finger on the rate trigger and running the risk of prematurely squelching the recovery -- even though Chair Jerome Powell mostly still sounds quite dovish.

In a move that surprised investors, a preponderance of policy makers penciled in two interest-rate hikes by the end of 2023 in forecasts released last month. They also began discussions on scaling back their $120-billion-a-month asset purchase program in light of what they saw as a rising risk of faster inflation.

“The market is saying the Fed’s about to exit but we don’t know if the economy can handle it,” Priya Misra, global head of rates strategy at TD Securities, told Bloomberg television on July 7. “That is a ‘policy mistake’ narrative, which I think the Fed needs to push back” against.

Fed Chair Jerome Powell will get a chance to do just that this week, when he delivers the central bank’s semiannual monetary report to Congress.

Market perceptions about fiscal policy have changed as well, as investors have marked down the chances of additional big budgetary packages, said Joseph Lavorgna, Natixis CIB chief economist of the Americas. “That is a real factor in helping to depress yields,” he said.

Biden has proposed two programs totaling more than $4 trillion, with outlays on everything from roads and bridges to child care and pre-school education.

But that money will be spread over a number of years. Also, there’s no way that Biden will get all of his plans through Congress and there’s a one-in-five chance he’ll end up with nothing, according to Andy Laperriere, a former congressional staffer who is Washington-based partner for Cornerstone Macro LLC.

Lacy Hunt, chief economist at Hoisington Investment Management Co., predicts that bond yields are headed even lower after a peak in both growth and inflation in the second quarter.

“The influences that were at work on supply and demand in the first half of the year are going to fade and the longer-term problems are going to re-assert themselves,” he said. “You are going to see a grinding of the yield curve with the longer-rates coming down” as the Fed holds short rates near zero.