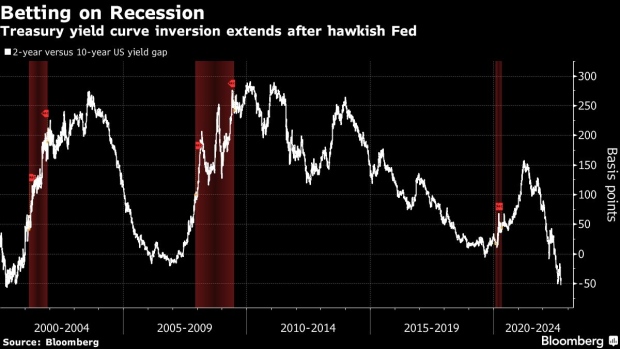 (Bloomberg) -- Bond traders are girding for the risk that Federal Reserve Chair Jerome Powell is ready, willing and able to plunge the US into recession to get the inflation bogey under control.

Yields on long-dated Treasuries dove in the wake of the Fed’s decision to push through a third straight 75 basis point interest-rate hike. The move was accompanied by projections showing rates will need to keep rising, and an admission from the central bank boss that this inflation fight will involve some pain.

Short-end rates for the first half of 2023 have already leaped higher, bringing market policy-rate expectations in line with those of officials near 4.6%, and indicating traders believe in the Fed’s determination to act aggressively until inflation is firmly trending lower. While the initial reaction was perhaps a bit too hawkish, the shakeout from bond and stock markets was that growth will ultimately suffer.

“If they are going meaningfully above 4% there is a strong chance of a recession,” said Andrzej Skiba, head of the BlueBay US fixed-income team at RBC Global Asset Management. “The front-end selling is telling you the dot plot was more hawkish, while the back end rally says recession is inevitable.”

Two-year Treasuries declined further Thursday, sending the yield 4 basis points higher to 4.09%. The curve between two and 10-years slumped to minus 58 basis points, virtually in line with an August low which was the deepest inversion since 1982. The 30-year yield was 2 basis points lower at 3.48%.

Recession expectations are clear based on swaps pricing out through the end of next year. Derivative contracts for the second half of 2023 imply a half-point cut before the year is out, challenging the Fed’s current outlook that the policy rate will end 2023 above 4.5% before easing to 3.9% by the end of 2024.

“Most of the market seems to think the Fed will over-play their hand,” said Chris Ahrens, a strategist at Stifel Nicolaus & Co. “I think there is a higher probability that the Fed has to move rates to levels above what they are currently projecting.”

A key consideration is how sticky inflation proves to be now that monetary policy is shifting into what policy makers consider restrictive territory. While some expect inflation will moderate from here on out thanks in part to rising mortgage rates and the impact on the housing sector, the worry is that buoyant wages and a tight labor market will continue to push consumer prices higher.

“Another sticky inflation report is going to put a spanner in the works and the market will project a 5% peak in rates,” said BlueBay’s Skiba.

During his press conference, Powell said “slower growth and a softening labor market” would be the price of the central bank’s campaign to restore price stability. In its latest summary of economic projections, Fed officials forecast the unemployment rate to rise to 4.4% next year.

Treasury traders took Powell’s message to heart. Another key portion of the curve reinverted after the Fed meeting, with the 10-year yield now exceeding that of 30-year bonds for the first time since June.

There’s no escaping the fact that bond-market positioning is warning of a growing likelihood of a hard landing, said Ben Emons, global macro strategist with Medley Global Advisors.

“Long-maturity bonds lend credence to the Fed’s determination to get restrictive because that ensures, in the view of the bond market, a painful recession,” he said.