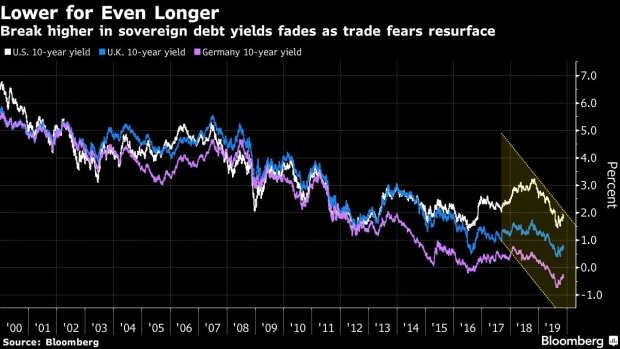 WASHINGTON, DC - MARCH 24: Sheets of one dollar bills run through the printing press at the Bureau of Engraving and Printing on March 24, 2015 in Washington, DC. The roots of The Bureau of Engraving and Printing can be traced back to 1862, when a single room was used in the basement of the main Treasury building before moving to its current location on 14th Street in 1864. The Washington printing facility has been responsible for printing all of the paper Federal Reserve notes up until 1991 when it shared the printing responsibilities with a new western facility that opened in Fort Worth, Texas. (Photo by Mark Wilson/Getty Images) Photographer: Mark Wilson/Getty Images North America , Photographer: Mark Wilson/Getty Images North America

(Bloomberg) -- Treasury investors just got one week closer to locking in their best annual performance since 2011.

The reflation wager that had 10-year yields on the brink of eclipsing 2% for the first time in months faltered last week. Investors’ frustration with the pace of progress in trade negotiations was a key reason bond buyers emerged. But signs of economic weakness in China, Japan and Europe were also at work, and evidence of still-muted U.S. inflation added to the mix.

For the world’s biggest debt market, a lot may hinge on the next few weeks, and whether the U.S. and China can reach a trade agreement. The Trump administration is signaling that talks over a first phase of a broad deal are in the final stages. But the Dec. 15 deadline for the next round of tariffs is fast approaching. With an accord, Treasuries’ roughly 7% return in 2019 could shrivel and prove the bond bears right. But a breakdown could pave the way for yields to tumble anew.

“The path of least resistance for Treasury yields is higher, but critically it’s also dependent on a trade resolution,” Gene Tannuzzo, deputy global head of fixed income at Columbia Threadneedle Investments, said in a Bloomberg Television interview. The trade standoff is “the biggest elephant in the room.”

After peaking at a three-month high of 1.97% on Nov. 7, benchmark 10-year Treasury yields have tumbled back to 1.83%, even after Commerce Secretary Wilbur Ross said Friday that a deal will get done “in all likelihood.” U.S. and Chinese negotiators held “constructive discussions” in a phone call Saturday to address core concerns of phase one of the trade deal.

Meanwhile, comments from Federal Reserve Chairman Jerome Powell last week left traders’ expecting around a quarter-point of easing next year. He signaled satisfaction with the current policy stance but noted that risks remain.

With the week ahead largely devoid of top-tier economic data, bond-market volatility could be subdued, according to BMO Capital Markets rates strategist Jon Hill. But he says the risk is skewed toward lower yields on any fresh impasse on the trade front.

“The pendulum had swung so far toward, ‘The Fed’s achieved a soft landing, everything’s awesome,’” Hill said. “That got ahead of itself,” and any disappointment on trade could see yields fall back toward 1.5%.

The 10-year yield’s low this year, of 1.43%, came in early September, when new tariffs went into effect and worries intensified that trade friction was sending the global economy into a tailspin.

For BMO, Treasuries’ sensitivity to expectations for the world economy is evident in their strong correlation with the performance of China’s currency. As Treasury yields sank this week, the yuan posted its biggest slide since September, weakening to about 7 per dollar.

BMO estimates that the offshore yuan would need to strengthen to 6.93 per dollar for 10-year yields to touch 2%.

The correlation “shows the importance of global, not just domestic, growth in setting the clearing level of U.S. rates,” Hill said.

In the eyes of Morgan Stanley strategist Matthew Hornbach, the U.S. would have to remove tariffs it imposed in September for 10-year yields to breach 2%.

--With assistance from Alexandra Harris and Liz Capo McCormick.