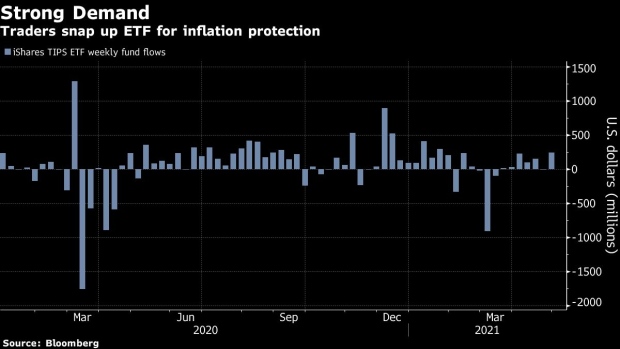 (Bloomberg) -- The Treasury market’s inflation bulls seem to have gotten a green light from Federal Reserve Chair Jerome Powell to double down on wagers that price pressures will only intensify in the months ahead.

The renewed mojo for the reflation trade follows Powell’s reaffirmation this week of the central bank’s intention to let the world’s biggest economy run hot for some time as it recovers from the pandemic. The Fed’s unwavering commitment to ultra-loose policy in the face of robust economic data is what caught traders’ attention. It took on added significance as it coincided with signs infections are ebbing again in the U.S., and as President Joe Biden unveiled plans for trillions more in fiscal spending.

Investors eying all this aren’t ready to give the Fed the benefit of the doubt in its assessment that inflationary pressures will prove temporary. A key bond-market proxy of inflation expectations for the next decade just hit the highest since 2013, and cash has been pouring into the largest exchange-traded fund for Treasury Inflation-Protected Securities. Globally, there’s been a net inflow into mutual and exchange-traded inflation-linked debt funds for 23 straight weeks, EPFR Global data show.

The Fed is stressing that inflation’s upswing “is transitory, but we likely won’t have better clarity on this assertion until this initial economic wave from reopening has subsided,” said Jake Remley, a senior portfolio manager at Income Research + Management, which oversees $89.5 billion. “Inflation is a very difficult macro-economic phenomenon to predict in normal times. The uncertainty of a global pandemic and a dramatic economic rebound” has made it even harder.

Ten-year TIPS provide a reasonably priced insurance policy against inflation risk over the coming decade, Remley said. The securities show traders are wagering annual consumer price inflation will average about 2.4% through April 2031. The measure has roared back from the depths of last year, when it dipped below 0.5% at one point in March.

“We want it to average 2%,” Powell said this week regarding the inflation benchmark the Fed targets. “And for that we need to see inflation expectations that are consistent with that, really well-anchored at 2%. We don’t really see that yet.”

The central bank has a long way to go to attain that goal. Its preferred inflation gauge finally rose above 2% in March, clearing that level for the first time since 2018. However, Powell reiterated this week he sees the move as part of an overall trend of one-time price increases as the economy re-opens. He also said employers don’t seem to be bidding up wages yet.

Surging commodities are adding momentum to the reflation trade. Fiscal and monetary stimulus have helped metals ranging from aluminum to iron ore, and home prices are soaring. Next week is also expected to bring another robust jobs report, with forecasts calling for the second straight month of gains exceeding 900,000.

Against that backdrop, the 10-year Treasury yield will likely move to 2% or higher over the next few months -- from just above 1.6% now -- and breakeven inflation rates will keep climbing, said Craig Brothers, a senior portfolio manager and co-head of fixed income at Bel Air Investment Advisors, which manages over $8 billion.

“It’s sort of like the perfect storm” with “the economy getting every benefit possible as the Fed is standing aside and Washington is helping as much as they can,” he said. “What I worry about regarding inflation is that the main areas many people feel, which is in food, energy and shelter, are all going up at a very strong rate.”

Bond traders have another big event on their radar next week. On Wednesday, the Treasury unveils its quarterly issuance plans, and most bond dealers expect it will announce refunding debt sales tallying $126 billion, the same as February.

However, many firms say the Treasury is poised to begin whittling down its note and bond sales later this year as funding needs have peaked. Some pointed as well to possible cuts to 20-year bond auctions, which the government resumed selling last year after a long hiatus.