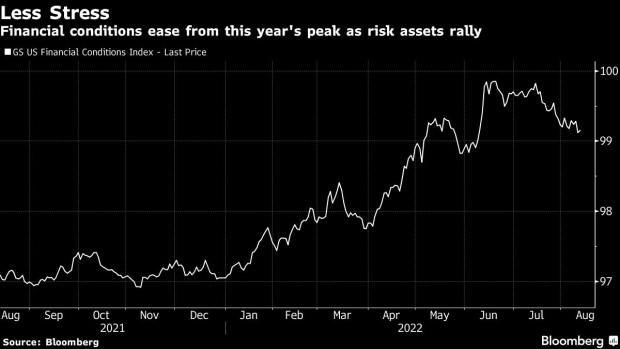 While the US central bank is trying to bring inflation to heel with increases in its policy rate, overall financial conditions have stopped getting tighter -- an outcome that’s at cross-purposes with what the Fed is looking to achieve. Declines in long-term interest rates in anticipation of an economic slowdown are loosening conditions both directly, through lower borrowing costs, and indirectly by stoking riskier markets like equities.

Financial conditions -- as measured by indexes that incorporate an amalgam of bond and stock-market metrics -- refers to the availability and cost of credit. Until late June they were tightening, but since then, rallies in equities and credit spreads have brought gauges such as the Goldman Sachs Group Inc.’s US Financial Conditions Index back to early-June levels. Declining long-term real, or inflation-adjusted, interest rates also are bettering financial conditions. The real-world evidence includes the still-tight jobs market, buoyant wages and rising rents.

Restoring price stability requires tighter financial conditions, however, so the trend calls to mind the mistakes made 40 years ago, when the central bank declared victory over inflation prematurely. Last week, several Fed officials took pains to emphasize that just because the most recent consumer prices report showed inflation ebbing, interest-rate increases were likely to continue into next year.

“Without tightening financial conditions further, inflation can ease further, but not back to the Fed’s 2% target,” said Mike Sewell, a portfolio manager T. Rowe Price. “You need to see higher real and nominal yields along with a stronger dollar -- that’s what helps the Fed tighten financial conditions.”

The dollar is also thwarting the Fed lately, down more than 2% from its mid-July peak as measured by the Bloomberg Dollar Spot Index.

With inflation still raging by historical standards -- the consumer price index rose 8.5% in July from a year earlier, off its June peak of 9.1% -- real yields provide a clearer picture of the recent improvement in financial conditions. While they’ve surged back from the deeply negative levels that prevailed for most of the past two years, they remain below the levels they attained during the previous Fed tightening cycle in 2018.

One measure, the five-year forward yield of five-year Treasury Inflation-Protected Securities, approached 1% in June and has since declined to about 0.47%.

“The Fed is in a difficult position and words are not enough,” said John Madziyire, senior portfolio manager at Vanguard. “They need to move rates higher or provide credible guidance that the bond market buys into.”

The rise in forward real rates tightened financial conditions as US equity benchmarks slumped to multi-year lows, although the latter have since recovered significantly, stringing together the longest streak of weekly gains in almost a year even as recession fears grow.

“The next leg of tighter conditions will come through higher rates, led by the front-end” and stem the rebound in risk assets, according to Madziyire.

The market for wagers on the Fed’s policy rate -- which it raised for the fourth time this year on July 27 to a range of 2.25%-2.5% -- are priced for it to peak at around 3.6% early next year, and decline by the end of 2023. A more aggressive course that pushes the policy rate past its neutral level into a restrictive zone could tighten financial conditions via higher short-term and real yields.

“There is a risk the Fed gets more restrictive and gets to 4% or higher,” a move that “will tighten financial conditions,” said Mark Kiesel, global credit chief investment officer at Pacific Investment Management Company LLC. The process is “just happening with a lag.”

It could happen this year, if the Fed opts for even just one additional three-quarter-point rate increase and two half-point moves in its three remaining meetings in September, November and December. Adjusting to that outlook could be messy though, even for a market that’s grown accustomed to big daily moves. The two-year Treasury note’s yield has risen or fallen at least 15 basis points in a day nine times this year, all but three since June 1.

“The front-end likely remains more volatile” given “the Fed still has a job to do in reducing inflation,” said Rick Rieder, chief investment officer of global fixed income at BlackRock Inc. “Financial conditions have eased a lot in the past month and it makes sense for the Fed to front-load another tightening -- via 75 basis points -- and then see how things develop after that.”