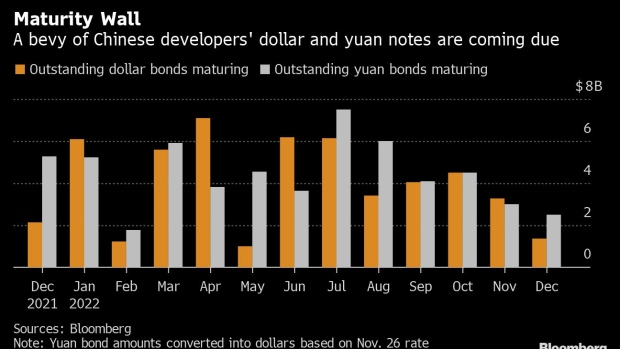 (Bloomberg) -- China’s stressed developers face nearly $1.3 billion of bond payments in December, including a unit of China Evergrande Group and Kaisa Group Holdings Ltd., which will see grace periods ending in the middle of next month. China Overseas Land & Investment Ltd. meanwhile agreed to sell a stake in a project for about $173 million.

Evergrande shares plunged 10% in Hong Kong trading Friday, the biggest drop in five weeks, while its 8.75% note maturing in 2025 dropped to 24.1 cents on the dollar. In other market moves, Chinese high-yield dollar bonds were down 2 cents on the dollar, according to credit traders. A gauge of real estate stocks slipped 3%, extending losses this year to 30%.

China’s property developers face nearly $1.3 billion of bond payments in December, after a month in which investor sentiment toward the property sector showed signs of stabilizing despite fresh signs of liquidity pressure.

The total payments were $2 billion in November, and there have been no defaults reported according to Bloomberg-compiled data as of Friday, after multiple instances in October. Still, investor scrutiny persists regarding principal and interest payments as a cash crunch engulfs the real estate industry. Center stage is Evergrande and Kaisa, two of the country’s biggest dollar-bond issuers. An Evergrande unit and Kaisa have grace periods ending by mid-December on a combined $170.9 million of coupons.

China Overseas Land’s subsidiaries agreed to sell a 30% stake in Kai Tak project for about HK$1.35 billion ($173 million), according to a Hong Kong Exchange filing. The buyer is Haijian I Investment, which is wholly owned by Haijian Fund LP.

China Evergrande Group Chairman Hui Ka Yan sold 1.2 billion Evergrande shares for the equivalent of $344 million, according to a filing to the Hong Kong Stock Exchange. That pares his stake together with that of his wife to 67.87% from 76.96%, the filing showed Friday.

Hui sold the shares at an average HK$2.23 each, the filing showed. That was a 20% discount to the closing price on Wednesday. The document didn’t identify the buyers.

Chinese regulators have urged Hui to use his own wealth to help shore up the finances of his distressed property empire, which has liabilities exceeding $300 billion. He has injected more than $1 billion into Evergrande since July, mainly by disposing of personal assets and pledging shares, China Business News reported last week.