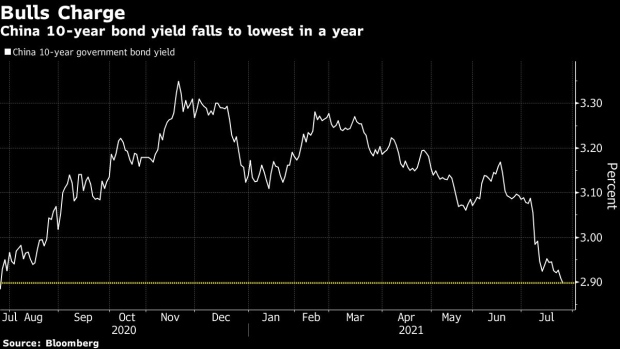 A man flies a kite on the Bund as the Lujiazui Financial District stands in the background in Shanghai, China, on Saturday, April 10, 2021. China's population is aging more quickly than most of the worlds developed economies due to decades of family planning aimed at halting population growth. Photographer: Qilai Shen/Bloomberg , Bloomberg

(Bloomberg) -- Traders in China are flocking to sovereign bonds as an expanding regulatory crackdown and concern that growth is slowing pressure risk markets.

The yield on benchmark 10-year government debt fell to the lowest in a year as stock gauges in China and Hong Kong declined by over 3%. High-yield dollar bonds dropped as much as 0.5 cents on the dollar.

A sudden policy change on education companies coming on top of crackdowns on technology firms, curbs in financing for the property sector, and signs of an expanding Covid-19 outbreak are building a narrative that a wide swathe of Chinese assets are under threat. Meanwhile, some July economic indicators show signs of weakness.

“The market is concerned about regulation tightening which might drag down the growth in coming quarters,” said Hao Zhou, senior emerging markets economist at Commerzbank AG in Singapore. “The policy uncertainties derived from the crackdown on private tuition has also dampened the sentiment.”

Stock traders are finding fewer options to invest in, with concerns leaping from technology to property to education and consumer sectors. Meanwhile, signs of a cash crunch at China Evergrande Group has stoked contagion fears and hurt high-yield credit.

The shift to risk-off trading is adding to a rally in China bonds, which began earlier this month on expectations that authorities will ease liquidity to support growth. The People’s Bank of China is forecast to cut the reserve requirement ratio for banks once more this year after a surprise reduction in July, according to a survey of economists by Bloomberg.

“Beijing has already cut the reserve requirement ratio and we expect it to introduce additional monetary and fiscal easing measures,” said Ting Lu, chief China economist at Nomura Holdings Inc. in Hong Kong. The economy “will face significant risks in coming months due to the unprecedented tightening measures applied to the property sector,” he said.

Adding to positives for Chinese sovereign bonds is a delay in local government issuance. Only 42% of the total annual quota given has been taken up in the first seven months of the year, Bloomberg calculations show. The sale of new municipal debt in July was only two-thirds that of June and the lowest since April.

“Risk off seems to have dominated for now due to policy uncertainty,” said Tommy Xie, head of greater China research at Oversea-Chinese Banking Corp. in Singapore.