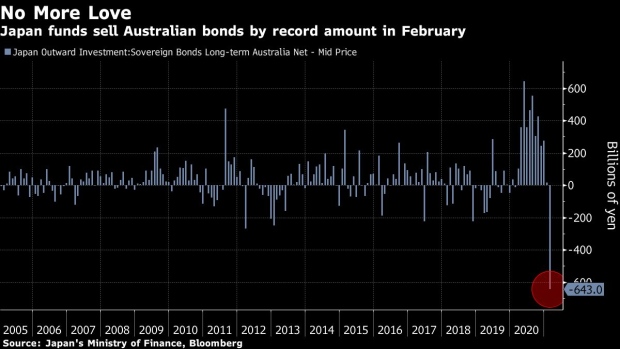 Pedestrians wearing protective masks cross an intersection at night in the Shibuya district of Tokyo, Japan, on Sunday, April 12, 2020. The central government this week declared a month-long emergency in Tokyo and six other prefectures representing about half of Japan’s economy, deepening fears that even with a record stimulus package, the economy could be heading toward a record contraction of 25% this quarter. Photographer: Kentaro Takahashi/Bloomberg , Bloomberg

(Bloomberg) -- Japanese investors turned sellers of U.S. sovereign debt to the tune of 618.7 billion yen ($5.6 billion) in February as the global bond rout forced them to cut losses.

The net sales, the first since August, also came as they sold a record amount of Australian sovereign debt, according to Japan’s balance-of-payment figures released on Thursday.

As the Biden administration’s pandemic-relief bill boosted expectations for a stronger U.S. economic recovery and pushed down bonds, Japanese investors reduced their interest-rate risk exposures, said Kenta Inoue, a senior market economist at Mitsubishi UFJ Morgan Stanley Securities Ltd. in Tokyo. He added that there may also have been some profit taking.

The net sales of Australian sovereign bonds totaled 643 billion yen in February, the biggest sales in figures going back to 2005.

Japanese funds had been scooping up bonds Down Under and likely became spooked as markets tested the central bank’s commitment to its monetary program, said Kazuhiko Sano, chief strategist at Tokai Tokyo Securities Co. in Tokyo.

Australia’s 10-year government bond yields rose above 1.9% in late February while those in the U.S. peaked around 1.6% that month.

Separate preliminary monthly figures from the Ministry of Finance showed life insurers were net sellers of foreign bonds for a ninth month in March.

Below is a table showing net purchases/sales of overseas sovereign bonds in billions of yen, based on data from Japan’s Ministry of Finance.

Note: Sovereign bonds in the Japanese data refer to securities issued by governments, government agencies and local authorities, andthose with the original maturities of more than one year.