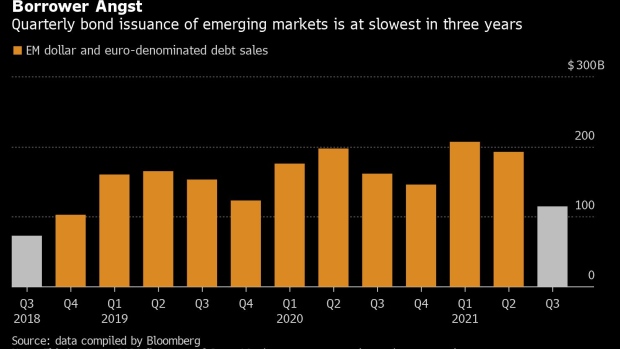 Workers arrange sacks of fertilizer at Sunda Kelapa Port in Jakarta, Indonesia, on Wednesday, Aug. 4, 2021. Southeast Asia’s largest economy has been topping the world’s tally of daily Covid-19 deaths as the delta variant spreads through the country and overwhelms its hospitals. Photographer: Dimas Ardian/Bloomberg , Bloomberg

(Bloomberg) -- Emerging-market bond sales are springing back to life before this week’s Federal Reserve meeting, as renewed speculation over imminent tapering prompts borrowers to raise money while it’s still cheap.

The past week shattered a summer lull for dollar- and euro-denominated debt, bringing $36 billion of issuance from governments and companies after the previous 10 weeks saw only $90 billion raised. Sales from Indonesia, Turkey, Chile, Serbia and Hungary were all met with robust investor demand. Middle Eastern borrower Arab Petroleum Investments Corp. is due to start investor calls on Monday, while Nigeria is gearing up for its first dollar-bond sale in almost three years.

The deluge marks a turnaround for a market in which sales had dropped to the slowest quarterly pace in three years due to a seasonal dip, as well as spasms in the corporate-debt market related to China Evergrande. A record pipeline of refinancings and renewed speculation about Fed tapering have created a sense of urgency.

“It is going to pick up pretty fast from now and the fourth quarter will be high,” said Nick Eisinger, co-head of emerging-markets active fixed income at Vanguard Asset Management in London. “Many countries have yet to complete their funding and some will pre-finance next year, especially before Fed tapering.”

Governments and companies in the developing world have some $102 billion of debt maturing through the rest of this year and a further $389 billion next year. This would leave investors cash-rich and eager to reinvest in emerging markets as long as they offer attractive extra yields over U.S. Treasuries.

“We would buy new debt and we are in a position in our fund to do so,” Eisinger said.

The northern hemisphere summer is typically a slow period for bond sales, but this year governments had even less motivation to borrow as the International Monetary Fund released funds and oil prices rose. Issuance totaled $127 billion this quarter, down from $161 billion in the same period last year.

Now, as Fed tapering may be nearing, borrowers are taking no chances, raising money before yields rise.

“Issuance will go up notably before quarter-end across regions due to good markets and strong investor liquidity,” said Stefan Weiler, the London-based head of debt capital markets for central and eastern Europe, the Middle East and Africa at JPMorgan Chase & Co. “October will be busy too.”

Meanwhile, deals are rolling in. Serbia sold the first green bond from the Balkans, while Poland’s MBank SA raised 500 million euros ($586 million) to become the first Polish lender to offer a euro-denominated green bond. Nigeria, which was expected to sell $3 billion in the second week of October, has already hired banks.

There is a borrowing renewal in Asia as well. China has an oversized impact on the new-issue calendar, said Todd Schubert, head of fixed-income research at Bank of Singapore Ltd. But increased issuance suggests the fallout from Evergrande may be contained. China Merchants Bank sold bonds on Sept. 9. Sinochem Group also issued debt last week.

“We have a strong pipeline for the rest of the year and expect volumes to match or exceed last year,” said Hitesh Asarpota, managing director, head of loan syndications and debt capital markets at Emirates NBD Capital, Dubai’s biggest lender.

These are the events to look out for this week: