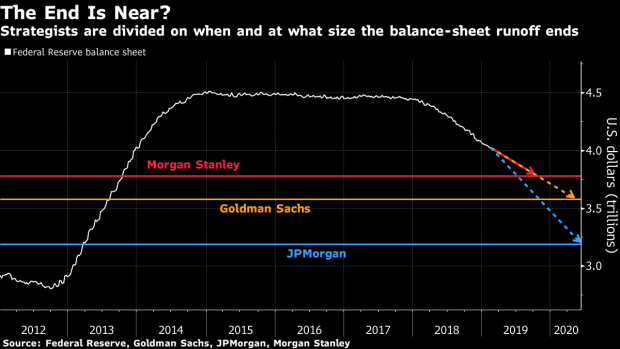 A pedestrian passes in front of the New York Stock Exchange (NYSE) in New York, U.S., on Tuesday, Jan. 22, 2019. U.S. equities extended losses, led by declines in industrial and energy companies, as a cloudy outlook for trade and growth continued to weigh on global risk appetite. Photographer: Michael Nagle/Bloomberg , Bloomberg

(Bloomberg) -- In the wake of last month’s Federal Reserve gathering, traders have been left with as many questions as answers when it comes to the fate of the central bank’s balance sheet. Next week may finally provide some clues on where the runoff goes from here.

The holiday-shortened week will be light on economic data but heavy on Fed signals. Investors will get to dive into the January meeting minutes, while also hearing from at least three policy makers who will address the $4 trillion portfolio specifically. Key for investors will be any insights into the ultimate end date of the unwind, the eventual size of the balance sheet and the final asset mix. These decisions have implications for a broad swath of the fixed-income world, touching on everything from mortgages to repos to Treasuries.

“Most of the focus will be on the balance sheet, given how, at this point, the Fed has largely capitulated to the market on rate hikes,” said Jonathan Cohn, the head of interest-rate trading strategy at Credit Suisse in New York. “The real surprise in January was how quickly they pivoted toward balance-sheet flexibility, so most of the attention will be on that front.”

At last month’s meeting, the Federal Open Market Committee said that it’s prepared to adjust its program to steadily reduce holdings of U.S. government bonds and mortgage-backed securities, seeking to maintain a monetary-policy regime with an “ample supply” of bank reserves while allowing for changes to the normalization process “in light of economic and financial developments.”

The announcement constituted a wholesale shift in their approach to the runoff -- Chairman Jerome Powell described it as recently as December as being on “automatic pilot” -- fueling speculation among market participants on the outlook for the unwind.

For starters, traders are still trying to understand what the Fed means by “ample supply.” The central bank’s crisis-era bond investments created vast excess bank reserves. Post-crisis rules enacted to curb risk-taking have prompted banks to use much of those reserves to meet the more stringent regulatory requirements. As the balance-sheet unwind slowly drains liquidity from the financial system, some in the market are suggesting bank reserves are once again poised to become scarce.

Fed Governor Lael Brainard this week said in an interview on CNBC that the balance-sheet unwind should probably come to an end later this year as financial markets signal significant demand for those reserves. Her timeline is roughly in line with a recent Bloomberg survey of economists, who expect the central bank to begin slowing the pace of the rundown in the third quarter.

With St. Louis Fed President James Bullard, Philadelphia Fed President Patrick Harker and Fed Governor Randal Quarles speaking about the outlook for the balance sheet on Feb. 22, investors are likely to get an even better look at thinking inside the central bank on the timetable for ending the rundown.

The median response in a separate query of interest-rate strategists suggests that the central bank will likely end the unwind when reserves reach roughly $1.1 trillion -- down from the current level of $1.6 trillion. That would leave the balance sheet at about $3.6 trillion, about what it was during the third round of quantitative easing.

Once the Fed decides on an end date and terminal size, policy makers need to decide how to execute the runoff. The central bank is currently reducing its bond holdings by a maximum of $50 billion per month by opting not to reinvest some of the proceeds of securities as they mature. One possibility is that it simply halts this process outright. Another would be to taper the Treasury and MBS runoff caps, which is what Cohn, Deutsche Bank strategist Steve Zeng and Nomura Securities’s George Goncalves all expect to happen.

In addition to when and how the Fed decides to end the rundown, there will be lingering questions surrounding the balance sheet’s ultimate composition. Policy makers have indicated they would like to return to an all-Treasury portfolio. If that’s the case, Goncalves says the Fed may actually become a buyer of bills once again as policy makers look to keep the balance sheet steady while allowing holdings of mortgage-backed securities to fully roll off.

“I see the desire for the Fed to shorten its maturity profile,” Cohn said. “Treasury bills continue to be a leg of supply that Treasury is leaning heavily upon. To the extent that the Fed’s policy can take some of the weight off is a good thing.”

--With assistance from Catarina Saraiva.

To contact the editors responsible for this story: Benjamin Purvis at bpurvis@bloomberg.net, Boris Korby, Mark Tannenbaum