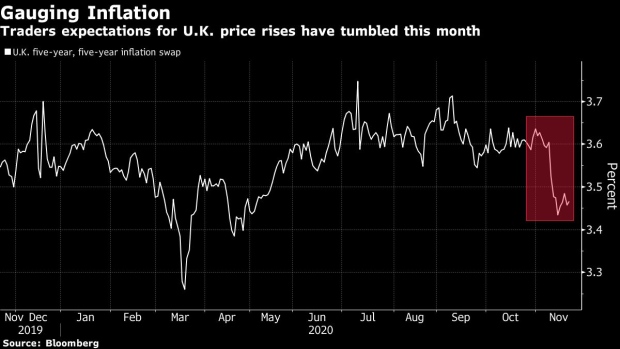 A pedestrian passes Christmas lights outside a Selfridges & Co. Ltd. department store window on Oxford Street in London, U.K., on Tuesday, Nov. 17, 2020. With a partial lockdown in England closing all non-essential stores until at least Dec. 2, rescuing the next six weeks from Covid-19 is critical for the U.K.'s financial well-being and a government beset by accusations that it can't get a grip on the pandemic. Photographer: Simon Dawson/Bloomberg , Bloomberg

(Bloomberg) -- The U.K.’s half a trillion pound inflation-linked debt market is set to be swayed by a technicality: how price rises are measured.

On Wednesday, the U.K. will release a long-awaited report on replacing the maligned Retail Price Index with the more preferred CPIH as the main inflation gauge. A switch to the new benchmark, which has shown consistently slower price increases since 2010, threatens to erode future returns on the securities.

The expected shift may be scheduled to take effect in 2030, according to Bloomberg Intelligence, but the risk is it could come sooner. That’s because a switch to CPIH-based inflation rates would help cut bond payouts for the government, which is borrowing record amounts to fund pandemic recovery efforts.

“Given the damage done to public finances over recent months, there is a stronger case to make the change as soon as possible,” said John Wraith, head of U.K. and European rates strategy at UBS Group AG. “There might be legal challenges from investors who bought linkers and believe they might be entitled to compensation, so it might be a while till any proposed change is definitively confirmed.”

Sterling-denominated five-year, five-year inflation swaps, a gauge of investor expectations for price rises over the next decade, dropped sharply this month to 3.43%, the lowest level since April. Britain’s inflation markets have long been distorted by strong demand from the country’s pension funds, which buy up the debt in an effort to meet future liabilities.

“The penny may have started to drop in the market,” said Adam Dent, U.K. rates strategist at Banco Santander SA. “Once the decision has been made, we expect demand for long-dated linkers and RPI swaps to surge after being very subdued for over a year.”

Reform of the RPI measure will have far-reaching consequences from student loan repayments to rail fares. While the index is no longer a so-called national statistic, fixing it requires Sunak’s approval as bondholders face the prospect of lower returns.

Also on Wednesday, the U.K. debt management office is poised to provide details of its borrowing needs for the rest of the financial year, and Chancellor of the Exchequer Rishi Sunak is set to conclude the government’s spending review.