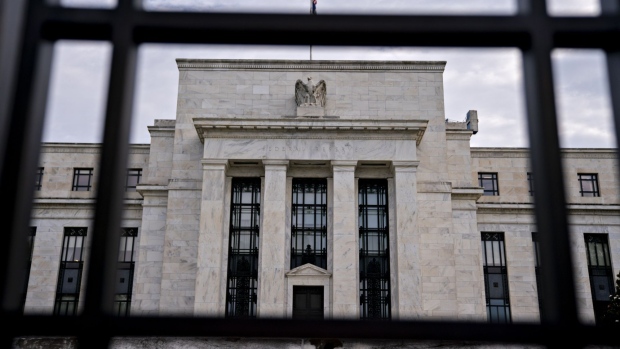 (Bloomberg) -- With the Federal Reserve’s Feb. 1 interest-rate decision a week away, traders in the options market are contemplating a scenario in which the rate hike it’s expected to deliver ends up being the last one of the tightening cycle.

Ahead of next week’s policy meeting, activity in options tied to the Secured Overnight Financing Rate has mostly been geared toward hedging against dovish outcomes, as well as outright bets that stand to benefit if investors scale back expectations for additional Fed tightening in coming months. Already, about half a percentage point of rate cuts are priced in for the second half of the year.

The swaps market has over the last week been steadily pricing around 48 basis points of rate hikes over the next two policy meetings. That implies a small chance — approximately 8% — that if the Federal Reserve raises its benchmark rate by a quarter point next week, it could be the central bank’s final move in a tightening cycle that has marked the most aggressive action against inflation in several decades.

One example of a recent dovish play seen in SOFR options has been the buildup of a $40 million position that stands to benefit from around 25 basis points of rate-hike premium being priced out of September 2023 futures. Other dovish scenarios include hedging against the possibility that the federal funds rate peaks well below the 5% level talked up by a number of Fed officials. Currently, the rate is 4.3%.

In the Treasury market, shorter-dated yields are beginning to retreat with the two-year on track for its largest one-month decline since March 2020.

To be sure, quarter-point rate hikes at each of the next two meetings remain the base-case scenario for many on Wall Street, although the seven-week gap between them adds a degree of uncertainty to the outlook.

“Given the timing of the window between the February and March FOMC meetings, the Fed will have a much greater understanding of the performance of the US economy when it meets late in Q1,” Ian Lyngen, the head of US rates strategy at BMO Capital Markets in New York, wrote in a note Monday.

“We don’t anticipate the information gained during the next intermeeting period will be sufficient to prevent a quarter-point move in March, but it could take a May hike off the table.”

--With assistance from Garfield Reynolds.