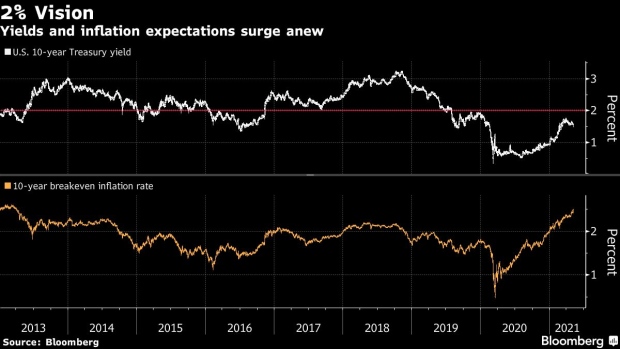 (Bloomberg) -- The prospect of a rebound to 2% yields on the world’s benchmark bond is alive and well.

Treasury-market bears found a deeper message within Friday’s weak employment report that’s emboldened a view that inflationary pressures are on the rise, and could boost rates to levels not seen since 2019. For Mark Holman at TwentyFour Asset Management, the sub-par April labor reading indicated companies will need to lift wages to entice people back into the labor force; he’s expecting a break of 2% on the 10-year this year.

That level has come to symbolize a return to pre-pandemic normalcy in both markets and the economy. The wild ride in markets on Friday suggests Holman likely has company in his views. Ten-year yields initially plunged to a more than two-month low of 1.46%, then reversed to end the day at 1.58%. Meanwhile, a key market proxy of inflation expectations surged to a level last seen in 2013.

“When you put all of this together, it confirms my slightly nervous view around inflation,” said Holman, TwentyFour Asset’s chief executive officer. “From a bondholder’s perspective, from my perspective, inflation is the bigger risk. We’ll see more bear steepening of the Treasury yield curve,” with long-term rates rising further.

Steepening was evident Friday, with 10- and 30-year yields rising more than their shorter-maturity counterparts. Part of that underperformance may be a result of investors looking to next week, when they’ll need to digest a record-matching $126 billion slate of 3-, 10- and 30-year Treasury auctions. There’s also a robust serving of corporate issuance next week, with dealers calling for $40 billion to $45 billion of sales.

The week ahead also brings consumer-price data, with a sharp annual acceleration forecast, although traders may dismiss the figure as resulting from a comparison to depressed levels of a year earlier, the so-called base effect.

There were signs in the jobs report that rising demand could already be putting upward pressure on wages. Average hourly earnings rose in April from a year earlier, while a drop was forecast. A separate compensation measure released last week -- the employment cost index -- had its largest quarterly gain since 2007.

Ten-year breakeven rates, a proxy for where investors see the annual consumer price inflation rate for the next decade, initially swooned on Friday before going on to surge to the highest since April 2013, at about 2.5%.

Overall, the turbulence Friday made clear that the debate over the outlook for the bond market is still raging. Signs of big changes in positioning also seemed to add to the volatility and indicated a diversity of opinions on just how high yields can go.

Dimitrios Delis, a managing director at Piper Sandler & Co., points to 30 years of data showing the 10-year yield has continued to drift lower with each passing decade to support his view that yields won’t unmoor.

“The bull market for bonds remains intact,” he said. “We can get to 2%, but it won’t be sustainable.”

Even if next week’s consumer-price report spurs a knee-jerk leap in rates, the move is likely to be brief -- presenting a buying opportunity for investors, he says. Bursts of demand emerged in other recent episodes to cap yields, like when the 10-year rate surged to 1.77% in late March, still its highest level of the past year.

He’s wary the U.S. is near “peak macro momentum” for the post-pandemic economic recovery and that long-term structural forces including demographics will keep rates low. He’s been “buying Treasuries to increase duration in portfolios.”