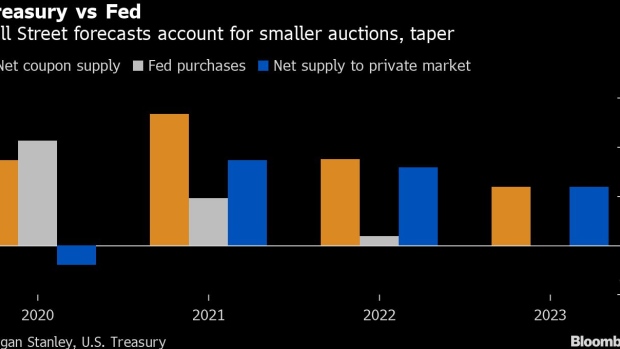 The Treasury Department in Washington, D.C., U.S., on Friday, Oct. 8, 2021. The Senate approved legislation Thursday that pulls the nation from the brink of a payment default with a short-term debt-ceiling increase, breaking a weeks-long standoff that rattled financial markets. Photographer: Stefani Reynolds/Bloomberg , Bloomberg

(Bloomberg) -- U.S. Treasuries are on the cusp of a major shift in the supply-demand dynamic that’s shaped the market for more than a year, potentially heralding opportunities for traders lamenting an extended stretch of limited volatility.

First, supply: Even if Congress passes infrastructure spending, Treasury auctions have grown bigger than they need to be, and cuts are expected as soon as next month. As for demand, the Federal Reserve, which has bought nearly $3 trillion of Treasuries since March 2020 to support the economy, is poised to start tapering its purchases -- also as soon as November.

The net impact on how much U.S. government debt the market will have to absorb -- it’s likely to be smaller in 2022 -- is only part of the story. The key reason Wall Street sees possible market distortions ahead for traders to pounce on is that the changes may unfold independently, and with less predictability when it comes to the Treasury’s issuance plans.

“We are more sure of the timeline for the Fed’s taper than for Treasury’s coupon-auction cuts,” said Steven Zeng, a rates strategist at Deutsche Bank AG. “There’s pros and cons to Treasury starting cuts in November or waiting until February. This uncertainty will provide some relative-value trading opportunities along the yield curve, probably most particularly around the 20-year point.”

Traders are bracing for this shift as markets globally are reckoning with an elevated pace of inflation that’s testing the Fed’s resolve to keep rates low until the labor-market recovery progresses further.

Benchmark 10-year yields reached 1.63% this week, the highest since mid-year. But they’ve still been largely capped and range-bound for much of 2021, leaving traders eager for turbulence to potentially profit from.

Treasury auctions are at record levels following a surge in 2020 amid an explosion in federal spending aimed at aiding the economy during the pandemic. The monthly five-year note sale, for example, reached $61 billion in January from $41 billion less than a year earlier.

The first round of cuts could be unveiled at the Treasury’s next quarterly supply announcement on Nov. 3. In August, an industry advisory board recommended reductions start in November, with larger drops in the 7- and 20-year tenors, offset by smaller reductions to the 5-, 10-and 30-year tenors.

Zeng says the case for waiting until February to shrink auctions is based on the prospect of costly infrastructure and social spending legislation being enacted around year-end. To the extent there’s disagreement among dealers on when the cuts will start, a decision to pull the trigger in November could spur outperformance by the 20-year, he said.

Meanwhile, the Fed -- which has been buying $80 billion of Treasuries a month -- would purchase $760 billion less in 2022 than this year if it tapers by $5 billion in November and $10 billion a month subsequently, according to Deutsche Bank. Fed Chair Jerome Powell said last month that the wind-down could begin as soon as November and end by mid-2022. The Fed’s next policy meeting concludes the same day as the refunding announcement.

Working with similar assumptions, Morgan Stanley strategists say net supply of Treasury notes and bonds to private investors -- meaning the total amount sold minus maturing debt and Fed purchases -- could decline to $1.58 trillion in 2022, from $1.72 trillion this year.

What’s key for traders, though, is that there are likely to be “differences in the handoff by tenor and sector” that present trading opportunities, Bank of America strategists Meghan Swiber and Ralph Axel said in an Oct. 15 report.