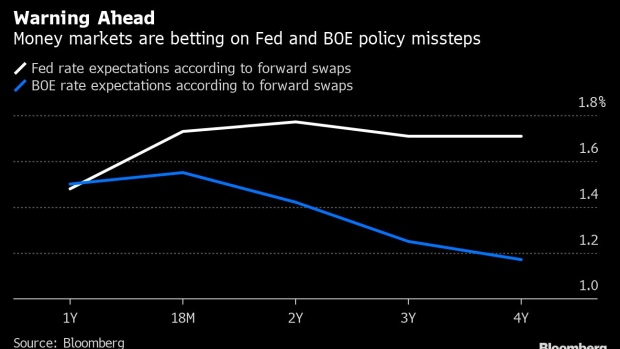 Money market traders have priced in nearly five five full quarter-point hikes this year, up from three in December. Yet investors still sees the funds rate topping out at around 1.75% -- below the Fed’s own projections -- and suggest traders remain reluctant to price in more tightening after being burned on such trades in the past, the global macro hedge fund manager said.

“If you go in a time machine back to 1985, and you show somebody the current economic conditions, they would say, ‘Wow, the Fed funds rate should be like 7 or 8%’,” the chief investment officer of Haidar Capital Management said in a phone interview. “Maybe we’re only going to get to 4% or something. But we’re going to get more than 1.75%.”

This disconnect with fundamentals -- as Haidar sees it -- captures two of the biggest crosscurrents in markets. U.S. investors are up against the fastest pace of inflation in nearly 40 years, which makes the case for an end to loose financial conditions that were appropriate during the depths of the pandemic. But those looking to bet on a zealous tightening cycle risk getting caught wrong footed, because the recovery could prove less resilient than anticipated.

Signs of unease are already showing up across global rates markets. In the U.S., traders see the policy rate peaking in two years’ time before dipping again. The positioning is more pronounced in the U.K., where rates start falling off in about 18 months’ time. For some, it’s shows the market is beginning to account for a possible policy error that could force central bank to reverse course.

“People aren’t willing to price these things because since the global financial crisis everyone who went short on the front end lost money,” he said. “You can’t fight the market, you can’t get super short and then have the market rally endlessly on you.”

Painful incidents included a stop-start hiking cycle in the U.S. between 2015 and 2016, and failed bets on the Bank of England raising rates in 2014. More recently, the BOE foiled traders in its preparation to start tightening, catching the market off-guard after policy makers opted not to raise rates in November.