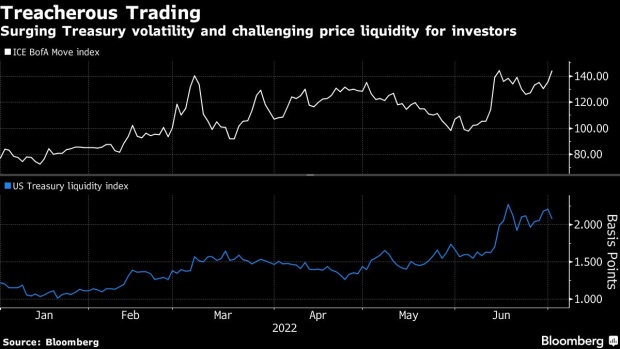 (Bloomberg) -- Bond traders are getting no summer break from the wildest Treasury market in years.

A closely watched gauge of volatility has surged to its highest since the covid crash of March 2020 as investors navigate conflicting cross currents in the economic outlook.

On the one side, there is persistent inflation and the Federal Reserve’s commitment to aggressively tighten monetary policy to contain it, which has pushed yields higher this year amid the worst selloff in at least half a century. On the other is the rising risk of a recession, which has been tugging yields downward at times when investors plow back into Treasuries as the go-to haven.

Both forces were on display Tuesday. The yield on the benchmark 10-year Treasury note jumped as much as 10 basis points to 2.98% in trading overseas, only to reverse course and slide as low as 2.8% as stocks tumbled on renewed concern that US economic growth will stall.

Erin Browne, a fund manager at Pacific Investment Management Co., said she’s expecting no “summer lull for volatility” in bonds, anticipating that it will continue to be a trying time until there’s a clear signal that inflation has peaked.

On Friday, the Ice Bofa Move index, a measure of 30-day implied Treasury volatility, hit the highest since the early days of the pandemic set off panic in financial markets. A measure of liquidity is also at its worst shape since then, according to a Bloomberg index, helping to exaggerate such price swings. The higher the index, the further bonds are trading from their fair value.

The tug-of-war in the world’s biggest bond market is unlikely to subside until the outlook for the economy and the Fed’s interest-rate path are clarified. The release of the Fed’s meeting minutes on Wednesday and the monthly employment report on Friday will both be scoured for such clues.

While the employment report is expected to show that job growth slowed in June, Fed Chair Jerome Powell has made it clear that he is focused on raising interest rates high enough to tame inflation. But that is stoking increasing speculation that the economy will lapse into a recession, as it did in the early 1980s, when then Chair Paul Volcker tightened policy aggressively to get consumer prices under control.

“The grand question is how tolerant will Powell be in playing the Volcker role if the economy heads south,” said William O’Donnell, managing director of rates desk strategy at Citigroup Inc. Until that is resolved, “volatility stays high.”

While the recent Treasury rally on recession fears has trimmed some of this year’s historic losses, much of the daily trading remains focused on short-term movements, making the market susceptible to rapid shifts as positions are unwound or piled into. For example, recent options activity has focused on weekly bets on the 10-year yield, alongside hefty sales of option premium that is profitable unless the 10-year yield falls below 2.62% or rises above 3.45% by September.

Meanwhile, some investors with a longer-term focus, including important buyers such as those in Japan, have largely sat on the sidelines, waiting for more clarity about the economy and the Fed’s trajectory.

“We are pretty stretched in terms of volatility and it’s hard to keep it that way once more supersized Fed hikes get delivered,” in the next three meetings and as the economy slows and inflation eases, said George Goncalves, head of US macro strategy at MUFG. “This is the most ambiguous point of the business and rate-policy cycle.”

Participate Now: We want to hear your thoughts on crypto in the latest MLIV Pulse survey