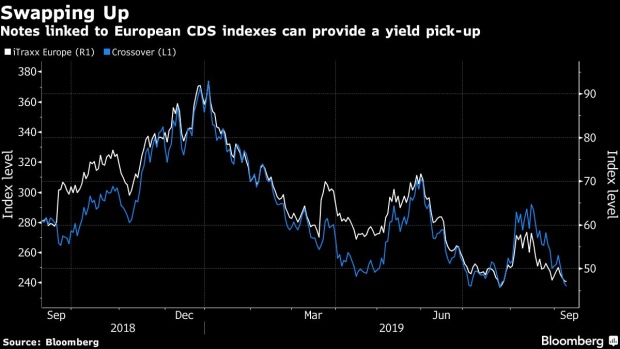 (Bloomberg) -- It’s the bond market equivalent of alchemy: converting negative interest rates into a bonanza of yield via the magic of derivatives.

In a $15 trillion world of sub-zero debt, investment banks are creating exotic solutions for investors looking to bet on everything from ever-lower rates to the bullish credit cycle.

Powered by swaps and options, these racy structures seek to quench a thirst for returns which is only set to grow as the European Central Bank preps fresh stimulus this week -- a move that could drag yields even lower across the euro area.

“The demand and interest is picking up because there is clearly no alternative,” said Kokou Agbo-Bloua, who develops trades and hedges for fast-money investors and asset managers as the global head of flow strategy and solutions at Societe Generale SA.

It’s a booming industry: Investors had a combined 273 billion euros ($302 billion) sitting in structured products in Austria, Belgium, Germany and Switzerland -- some of Europe’s largest markets -- at the end of June, according to an industry trade group. That’s up 9% from a year earlier.

Fancy a way to profit from financial repression in a region where some lenders can charge wealthy clients for deposits? Consider inverse floaters. They offer coupons that rise the deeper rates tumble into negative territory -- resembling the kind of high-octane exchange-traded funds that gain when markets drop.

A typical 10-year inverse floater might be callable and pay a coupon equivalent to 0.5% or 1% minus the five-year swap rate with a multiplier, according to London-based Agbo-Bloua.

“For any insurance company or pension fund, this type of thing would be consistent with their mandate and would diversify away from the positions they have today, which are not yielding much,” the Societe Generale managing director said.

If negative rates in euro-zone money markets have got you down, there’s a structured trade to help. German lender Landesbank Hessen-Thueringen sold as much as 30 million euros of callable notes in July that pay a fixed coupon of 1.896%. The twist: It all hinges on the two-year interest-rate swap in euros staying negative through 2021.

Think of it as bearish bet on euro-zone stagnation. It’s the latest take on a note known as the range accrual; the securities typically offer a fixed coupon as long as an underlying rate -- like three-month Euribor -- trades within a band.

Banks have sold structured notes in droves tied to indexes of credit-default swaps on junk-rated corporate debt. Investors can get higher coupons this way relative to cash bonds thanks to the premium paid by those on the opposite side of the trade: buyers of the CDS.

The strategy looks particularly appealing right now given liquidity risk in single-name obligations and the rising stock of negative yields in the asset class, which are likely to saddle buy-and-hold investors with losses. The outstanding amount of high-yield corporate bonds in euros trading with below-zero yields is around 6.9 billion euros, according to Bloomberg data.

Lenders have issued about $1.5 billion of notes tied to European swap indexes this year after selling $2.1 billion in 2018, according to data compiled by Bloomberg. So-called tranche notes allow for a number of defaults among index members before holders suffer losses, making them a relatively “conservative” bet, according to Arthur Teixeira at HPC Investment Partners.

“It’s a very good alternative to classic bonds,” said the London-based broker who sells structured products. A typical deal might see investors earn a 2.26% coupon in euros over a five-year term, according to Teixeira.

With nearly all high-grade corporate bonds in Swiss francs offering below-zero yields, a 13.8% coupon in the haven currency sounds too good to be true. But investors can dig for double-digit returns if they wager that U.S. money-market yields won’t follow European rates into the abyss.

Dubbed a reverse convertible, the one-year securities are typically linked to stocks and are fueled by deep out-of-the-money put options. In a variation sold by HPC, the exotic product is tied to three-month U.S. dollar Libor. As long as the soon-to-be-extinct interbank rate doesn’t drift 40% lower over the lifespan of the note, investors earn a beefy coupon, according to an indicative term sheet.

--With assistance from Tasos Vossos.

To contact the reporter on this story: Yakob Peterseil in London at ypeterseil@bloomberg.net