Treasury yields hit multiyear highs and stocks fell as a parade of central banks joined the Federal Reserve in boosting rates to curb scorching levels of inflation at the expense of economic growth.

Ten-year US yields hovered near 3.7 per cent, the highest since February 2011. The S&P 500 closed at the lowest since June, with some Wall Street voices predicting the gauge may soon test its June bottom that stands about 2.5 per cent below current levels. FedEx Corp. climbed after saying it expects to save up to US$2.7 billion as a result of cost-cutting steps.

The dollar remained near its all-time high, fueled by hawkish Fed policy and investors in search of haven. The Swiss franc slumped as a central bank hike proved not enough to satisfy expectations, while Japan propped up its currency for the first time since 1998.

The Fed gave its clearest signal yet that it’s willing to tolerate a recession as the necessary trade-off for regaining control of inflation, with officials forecasting a further 1.25 percentage points of tightening before year-end. Norway, Britain and South Africa also followed with hikes of their own as officials rush to get to grips with rampant price increases.

“We see this new even-higher-for-longer rate path as associated with a substantially greater higher likelihood of a hard landing, and so not just unambiguously hawkish but unambiguously bad for risk,” said Krishna Guha, vice chairman of Evercore ISI. 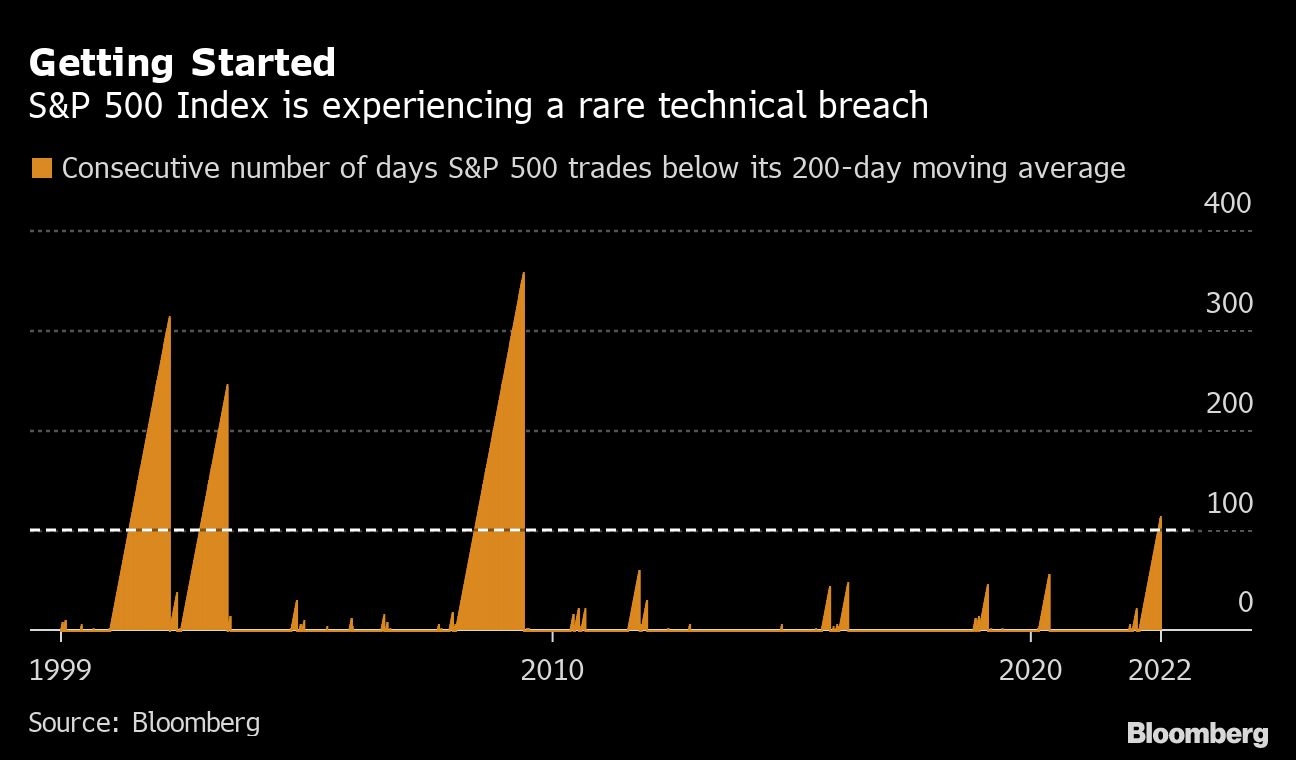 The S&P 500 could be poised for more downside after breaking through a rare technical indicator, according to Berenberg strategists including Jonathan Stubbs.

It has traded below its 200-day moving average for over 100 sessions -- a streak that was previously breached only during the tech bubble and the global financial crisis in the past 30 years. In both of those instances, the gauge posted most of its losses after surpassing that level, with the index declining by a further 50 per cent in 2000-2003 and 40 per cent in 2008-2009 before troughing, they said.

Evercore’s chief equity and quantitative strategist Julian Emanuel cut his S&P 500 year-end projection to 3,975 from 4,200 and expects a “full retest” of the June low in the weeks ahead. The target cut accounts for a rising probability of a recession following Fed Chair Jerome Powell’s warning that the rate-hike process won’t be “painless” for the labor and housing markets.

“The bad news is we are still in one of the weakest seasonal windows of the year, especially in a mid-term year,” said Jonathan Krinsky, chief market technician at BTIG. “The good news is that it quickly reverses by mid-October. We think we test or break the June lows before then, which should set up a better entry point for a year-end rally.”

“It’s tough to get long until we get signs of slower underlying demand growth, but tail risk is limited by already tighter financial conditions, lower PEs, and higher implied vol,” he wrote.

The environment isn’t suitable for strong directional positioning on overall indexes, according to Mark Haefele at UBS Global Wealth Management. However, he advises against retreating to the sidelines, “especially given the drag on cash from high inflation and the challenge of timing a return to markets without missing out on rebounds.”

“Instead, we stay invested but also selective, and focus our preferences on the themes of defensives, income, value, diversification, and security,” he added.

Here are some of the main moves in markets: