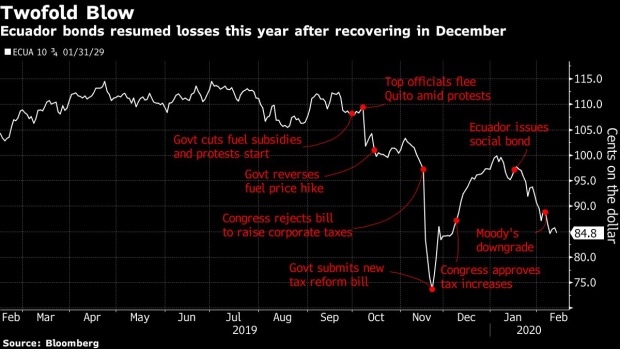 (Bloomberg) -- The second worst-performing bonds in the developing world are getting hammered anew -- and this time, few are betting on a quick rebound.

“A lot of investors were overweight on Ecuador,” said Alex Kozhemiakin, the Philadelphia-based head of emerging markets debt at Macquarie Investment Management, which has $1.7 billion in developing-nation assets. “Those that had a more sanguine view on Ecuador already hold the name and those that don’t hold will wait, so we don’t see a strong rebound in prices.”

Even so, Kozhemiakin said he bought some debt as prices tumbled, saying current yields account for the risk. Ecuador dollar bonds due in 2029 dropped more than 13 cents this year to about 85 cents, sending yields to 13.8%. Spreads over Treasuries widened by about 320 basis points, more than any nation in the JPMorgan EMBI Global Diversified Sovereign index save for Lebanon.

Those spreads could attract buyers in a world starved for yield, said James Barrineau, a money manager at Schroders Plc in New York. Yet any rally would be capped by political uncertainty ahead of the presidential and legislative elections a year from now, he said.

As a presidential election looms, politics are “more problematic” than the fiscal situation, said Barrineau, who holds some Ecuador debt. “We believe they can muddle through fundamentally and would add if political uncertainty dissipates.”

With the vote still 12 months away, plenty of other amber signals are flashing as the economy barely expands and fiscal accounts deteriorate. Interest expenses as a share of total revenue increased to 17.3% in 2019 from 14.7% in 2018, while the fiscal deficit widened to 3.8% of gross domestic product from 3.6% the previous year, according to Moody’s Investors Service.

The ratings company cut Ecuador to Caa1, seven notches into junk, from B3, saying the government’s market access is constrained by a challenging debt amortization schedule beginning in 2022. The government and firms including Credit Suisse AG have pushed back, noting the two-year time line. Finance Minister Richard Martinez says the government will step up efforts to explain to investors and ratings firms debt reprofiling plans that aim to reduce payments in coming years.

Ecuador’s $4.2 billion IMF program ends in 2021. The nation has about $18 billion of dollar bonds outstanding, according to the Finance Ministry. While the specter of default isn’t on the horizon, Ecuador’s history isn’t reassuring: it trails only Venezuela for the world’s most defaults since 1800, according to Harvard economist Carmen Reinhart.

While the IMF is expected to keep supporting Ecuador, the nation needs to meet fiscal targets imposed by the fund, government efforts to move along with reform may be complicated by next year’s elections, said Anders Faergemann, a senior portfolio manager at Pinebridge Investments in London.

“Without IMF support next year, Ecuador could be running out of capital and the situation would clearly become more serious,” Faergemann said.

--With assistance from Sydney Maki, Stephan Kueffner and Ben Bartenstein.