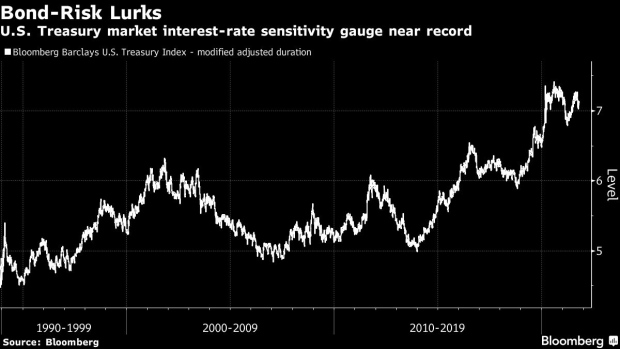 (Bloomberg) -- After a wild week on Wall Street that saw inflation expectations reach decade highs, portfolio managers are staring down an ever-more dangerous prospect: A modest rise in yields that inflicts trillions of dollars in losses.

It’s a result of investors’ exposure to duration, a key gauge of risk for bondholders that’s near record highs. Even a half-percentage point jump in yields from here, to roughly the pre-pandemic average in 2019, would be enough to ravage funds of all stripes. It’s a threat with implications across asset classes, from emerging markets to high-flying tech shares.

This scenario is staring investors in the face after 10-year U.S. Treasury yields bumped up against their peak levels of 2021 this week amid wagers the Federal Reserve will start lifting borrowing costs next year.

The potential for steep losses is a legacy of the tilt toward longer-term borrowing during the era of historically low rates. The higher duration is, the larger the drop in prices for each notch up in yields. And it’s not just the U.S.: The risk is global as inflation threats have induced many central banks to turn hawkish.

“Higher rates is a systemic risk now,” said Barbara Ann Bernard, founder of hedge fund Wincrest Capital. “Higher rates are a headwind for everything, except banks. Also, the risk is that if inflation continues at these levels that growth will be very slow.”

The Wall Street consensus is for 10-year Treasury yields, which touched 1.7% this week, to reach 2% a year from now. That would put them in range of their 2.14% average for 2019. The rate has already surged about a half-point since early August.

The grind higher has led to questions around stocks. The sensitivity to higher rates within equities is greater for firms whose cash flows are anticipated further down the road. That leaves tech companies most exposed. Many risky assets are vulnerable, including corporate debt below investment grade.

In the bond world, it wouldn’t take a slump of the magnitude seen in 1994, an infamous year for debt investors, for losses to be substantial.

With a half-point increase in yields, the Bloomberg U.S. Treasury index would incur over $350 billion in losses, given the roughly $10 trillion of debt it tracks and the surge in its duration in the past 18 months. The hit to the $68 trillion Bloomberg Global Aggregate Index -- which includes corporate and securitized bonds of both developed and emerging markets -- would be around $2.6 trillion.

“So many risk assets are expensive because of low real rates,” said Alberto Gallo, a portfolio manager at Algebris Investments. “As central banks attempt a normalization, this will change.”

Of course, there’s a camp predicting yields will retreat next year. This cohort sees inflation easing and points to forces weighing on growth, such as demographics. These market watchers also emphasize that the Fed is going to retain its massive bond holdings, even after it starts tapering purchases.

For now, the bears are ascendant. Bloomberg’s U.S. Treasury index has declined 3.3% this year through Oct. 21, on course for its biggest annual loss since 2009.

Investors appear to be doing just that: The latest Bank of America Corp. monthly fund manager survey showed they’re the most underweight in their bond allocation ever.

The question of whether accelerating inflation will prove transitory is at the heart of the debate in the bond market. The risk for higher long-term yields also stems from the Fed’s policy shift to allow inflation to run hot to bolster the labor market.

Next week brings an update on the Fed’s preferred inflation measure, which rose at a 4.3% annual pace in August, the highest in more than a decade. Also due is a report expected to show U.S. growth slowed sharply last quarter.

The next big milestone for bonds is likely not far off. Fed policy makers last month broadly agreed they should start shaving their monthly bond buying in mid-November or mid-December amid increasing concern over inflation. And while officials expect elevated inflation to abate, there is plenty of uncertainty around the outlook.

“Core government bonds have historically been seen as a key source of diversification in a multi-asset portfolio,” said Hugh Gimber, a global strategist at J.P. Morgan Asset Management. “Today they are a key source of risk.”