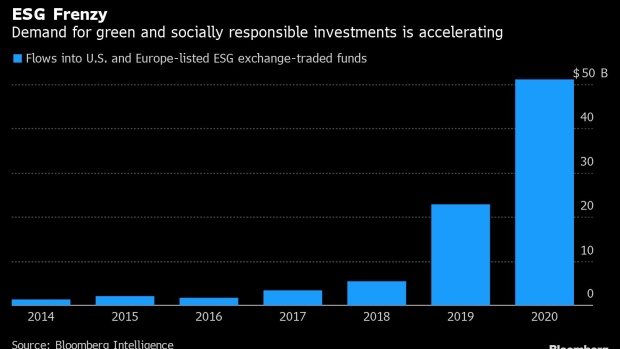 The next thing in green investing is a new kind of debt designed to help fund the trillions of dollars needed to wean the world from carbon.

Transition bonds are being developed for fossil-fuel companies and other heavy corporate emitters, which have largely been shut out of a booming green market. So-called brown industries would have to use proceeds from the sales to fund their clean-energy transformation.

Next year “will be a ramp-up phase for transition instruments,” said Marisa Drew, Credit Suisse Group AG’s chief sustainability officer. “We’ll have some experimental issuers tap the market and then we’ll see many investors lining up.”

The United Nations estimates the cost to decarbonize the world will be $35 trillion, and capital markets will have to play a role. Corporations such as Citigroup Inc. and Verizon Communications Inc. and governments from Chile to Sweden raised a record $235 billion this year in green bonds, used to fund environmentally-friendly projects.

Such financing is likely to get another boost next year from the European Union’s plans to start green bonds and from U.S. President-elect Joe Biden’s prioritization of climate policies. The coronavirus pandemic is also spurring an explosion in social bonds, where issuance is up eight times on last year to fund projects that benefit society as a whole.

Behind the scenes, bankers and investors are now writing rules for transition finance. The ground is fertile partly because there aren’t enough green bonds to satisfy investor demand, Drew said. That was shown by near-record bidding for a debut green sale from Germany, with the securities trading at a premium to the country’s conventional debt.

“I don’t think anybody thought in January, and certainly not since we became aware of the gravity of Covid, that this would be such a busy year for green bonds,” said Daniel Klier, HSBC Holdings Plc’s global head of sustainable finance. “It helped that governments and central banks put green topics at the heart of their recovery plans and that companies with superior environmental, social and governance profiles performed better in the crisis.”

As demand has risen for green bonds, their yields have fallen below those of conventional bonds. Enel SpA expects its cost of borrowing to decline because of the company’s decision to use sustainable finance for an increasing proportion of its debt. The Italian utility said its sustainability-linked debt cost it 15 to 20 basis points less than non-ESG debt.

The growing interest from borrowers and investors means green finance is heading for the mainstream with issuance set to surge by around 60% next year to reach $640 billion, according to NatWest Markets Plc.

“What we need is for companies to sign up to whole-company, science-based, environmental targets to achieve meaningful impact,” Chinery said.

Companies have an incentive to commit to such targets because heavy polluters are facing the threat of tougher rules, as countries try to meet long-term emissions targets. Meanwhile, many banks and investors are planning to cut financing or divest funds from laggards, likely raising their cost of capital, as they pour money into ESG investments instead.

Transition bonds aim to provide a solution by tying funds to strict targets, aligning borrowers’ interests with wider policies such as the UN Sustainable Development Goals and the Paris Agreement on climate change.Several ideas how this might work have been suggested, including a proposal from French insurer Axa SA, and a more recent offering from the Climate Bonds Initiative that focuses on how companies can transition to low-emission solutions. The International Capital Markets Association, whose voluntary guidelines for other types of sustainable debt are widely used, is due to release a handbook for climate transition finance on Dec. 9.Yo Takatsuki, head of ESG research and active ownership at Axa Investment Managers, and one of the ICMA group’s coordinators, said climate transition finance rules need to be ambitious and have the Paris agreement at their heart. “This will be the first global attempt by the capital markets to set a framework for the transition,” he said. “If we don’t map out how to transform brown industries to green, then we won’t be able to achieve Paris.”The ICMA working group on climate transition finance has more than 80 participants, including building materials companies Buzzi Unicem SpA and LafargeHolcim Ltd., as well as oil producers Repsol SA and Total SE.

Only a handful of companies have so far sold transition bonds, given the lack of consensus on what they should be. One of the first was from a Brazilian beef producer, Marfrig Global Foods SA, which said proceeds from the $500 million bond would be used to buy cattle from ranchers in the Amazon region who comply with non-deforestation and other sustainable criteria. Other deals include a 500 million-euro ($595 million) bond from Italian gas pipeline operator Snam SpA.Total, France’s largest oil company, announced plans last month to sell a “very large” transition bond, while other European majors have stressed the importance of a transition away from oil. LafargeHolcim raised 850 million euros of sustainability-linked bonds earlier this month that will pay a 0.75% higher interest rate if the company misses a carbon-emissions target.

“If done right, transition bonds can offer an important additional asset class for issuers alongside green bonds, and with that help to prevent greenwashing in the green bond market,” Mario Eisenegger, a money manager at M&G Investments, wrote in a blog posting earlier this year calling for industrywide standards for the securities.Greenwashing, where environmental benefits are exaggerated or misrepresented, is a growing concern as the sustainable finance market expands, said James Rich, senior portfolio manager at Aegon Asset Management. But if investors can successfully identify the most promising labeled bonds, that should ultimately push issuers to increase the sustainability of their business, he said.The ability of transition bonds to grow as an asset class, particularly as quickly as backers hope, depends on ambitious action across all parts of the financial system, said Ben Caldecott, director of the Oxford Sustainable Finance Program. That is needed given adapting to climate change is likely to be the most expensive shift in human history.

“All finance needs to become transition finance,” he said.