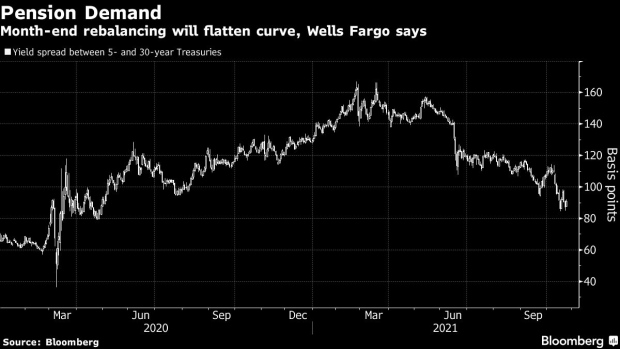 (Bloomberg) -- The flattening of the U.S. yield curve is set to get a bit more fuel as U.S. pension funds will need to rebalance this month by moving $5 billion into fixed income and out of equities.

Wells Fargo & Co. strategists reckon that shift will take place because the pensions’ funding ratios have improved given rising equities as well as higher yields -- which reduce the discounted value of the systems’ liabilities. By the bank’s calculation it will be the biggest such wave since a $23 billion flow in March.

“We expect the vast majority of these rebalancing flows to be at the back end of the curve, hence the flattener,” Mike Schumacher, head of rates and macro strategy at Wells Fargo, wrote with his colleague Zachary Griffiths in a note Monday.

The gap between 5- and 30-year Treasury yields has already shrunk to the narrowest since April 2020 as traders have brought forward when they expect the Federal Reserve to lift its policy rate from near zero.

Pension funds tend to follow a strategy of matching liabilities -- which are usually long-term -- with similar-maturity debt. They’re part of a group of funds that tend to rebalance portfolios to maintain pre-set allocation levels.

Stocks have recovered from a September rout, with the S&P 500 index jumping about 6% this month, on course for its best performance since November. Helping buttress the gain were better-than-expected earnings that have eased concern over everything from supply-chain disruptions to labor shortages.

Meanwhile, 10-year Treasury yields, at about 1.63%, have been approaching their 2021 highs. The pension shift may not be the only reason to favor long-term debt in the days ahead. Economist Dennis Gartman points to a trading pattern from Friday that suggests Treasuries may get a bounce.

While the estimated $5 billion equity outflow looks tiny in a market where daily turnover has averaged $550 billion this year, pension-fund rebalancing has become a force that traders monitor to gauge supply-demand dynamics around month-end.

“We project the largest outflow will come from U.S. large cap equities, which have outperformed every asset class except real estate on the month,” the Wells Fargo strategists wrote.