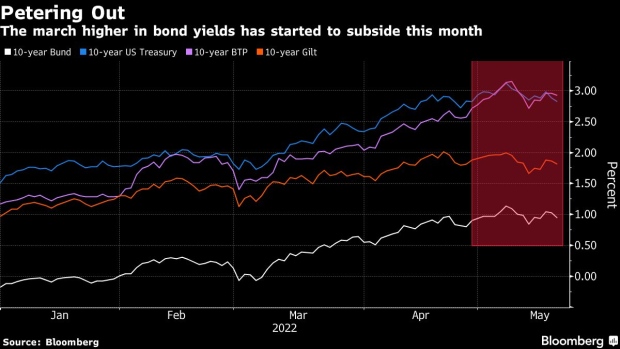 (Bloomberg) -- Bonds staged a sweeping rally on Thursday amid a growing sense of angst over the health of the global economy.

Investors sought out the safest debt, sending German bond yields back below 1%. In a sign of nervousness, the spread between 10-year notes and their swap counterparts rose the most in almost two weeks. Italian bonds and US Treasuries also moved higher.

The moves add credence to the view that the worst of the bond rout may be over, at least for now, as concerns over the economic outlook vie with hawkish central bank rhetoric. Evidence that the US consumer isn’t as strong as people thought is stoking fears about lower corporate profits.

“We are really starting to see a clearer negative correlation between bond prices and equities,” said Adam Kurpiel, head of rates strategy at Societe Generale SA.

The stock and bond moves are “a sign that markets are more confident in central banks’ ability to quash inflation eventually,” said Antoine Bouvet, rates strategist at ING Bank NV.

“For the same reason, we’re also seeing curves flatten,” he added. “It is far too early for central banks to tone down their hawkish rhetoric so front-end bonds cannot rally as much as the long-end.”