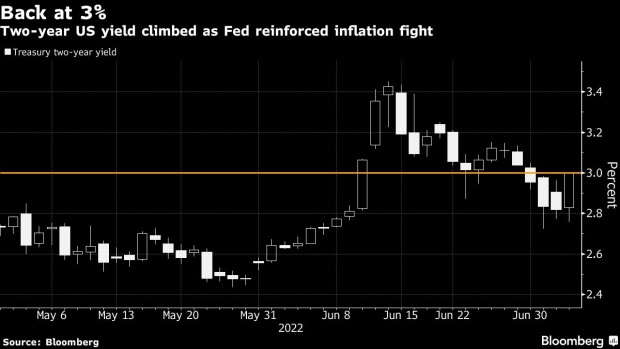 (Bloomberg) -- Stocks in Asia look set for a steady start on Thursday as investors weigh the economic outlook and Federal Reserve minutes that highlighted the central bank’s determination tackle inflation.

Futures rose for bourses in Japan and Australia, but Hong Kong’s were little changed in the wake of a slide in US-listed Chinese equities. US futures fluctuated following a choppy Wall Street session that produced modest gains.

The minutes of the June meeting flagged the possibility of “even more restrictive” monetary policy to prevent entrenched inflation. Shorter-maturities led a slide in Treasuries that took the two-year yield to 3%.

Markets expect another 75 basis point Fed hike in July. The peak of the tightening cycle in early 2023 is now see at above 3.4% from around 3.2% earlier. The dollar pushed higher.

Inversions along the US yield curve are among the signs of concern that higher rates could spark a recession and looser policy later next year. Others include a broad retreat in commodities that’s left oil below $100 a barrel.

The latest market gyrations extend a period of volatility across assets as investors grapple with threats from high inflation and slowing economic expansion amid tightening monetary settings in much of the world.

For Priya Misra, global head of rates strategy at TD Securities, the Fed minutes were “hawkish relative to a market that has increasingly become convinced that the Fed is about to blink on hikes due to an imminent recession.”

Data released Wednesday showed that US job openings dipped slightly in May but remained near a record, pointing to resilient demand for labor even as optimism about the economy’s prospects dim. Growth in the US services sector eased in June to a more than two-year low but exceeded estimates.

The pound held losses amid the continuing political drama in the UK. Boris Johnson told Cabinet colleagues he will not resign as Conservative leader and prime minister, despite a slew of ministers quitting and some of his closest allies demanding he go.

Bitcoin versus Ether? Stablecoins versus central bank digital currencies? What are NFTs really? What is the next shoe to drop in the crypto washout and where will the next bubble inflate? Click here to participate in this week’s MLIV Pulse survey, which takes only one minute and is anonymous.