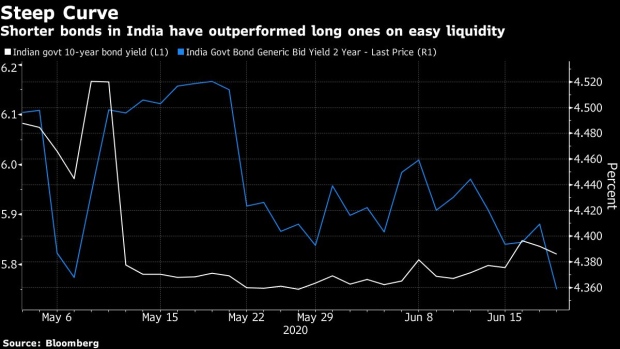 (Bloomberg) -- India’s sovereign bonds climbed after the central bank said it will resume its Federal Reserve-style Operation Twist to cool longer-end yields, but uncertainties on the frequency of such support measures limited further gains.

The Reserve Bank of India will buy 100 billion rupees of bonds ($1.3 billion) while selling an equal amount of treasury bills on July 2, it said in a statement Monday after trading hours. It last bought and sold bonds simultaneously, in an action known as Operation Twist, on April 27.

“Considering weekly auctions are of 300 billion rupees, this one-off (and modest sized) operation will temporarily support markets,” Radhika Rao, India economist at DBS Bank wrote in a note. “A more decisive road map of open-market operations will be necessary to materially lower rates.”

India’s yield curve has steepened as the central bank stayed away from either announced or discreet bond purchases for several weeks, even as the government executes its record 12 trillion rupees of bond sales in the current fiscal year. While the latest measure has calmed market concerns for now, doubts remain on whether the RBI will continue with the support measure.

“The market confidence is low in terms of frequency of open-market operations,” said Naveen Singh, head of fixed income at ICICI Securities Primary Dealership Ltd. “We don’t know whether this is one-off,” he said.