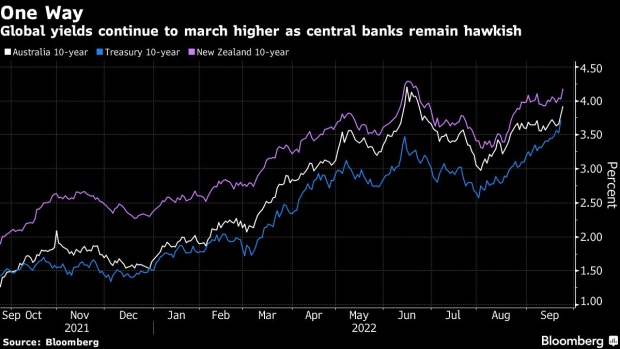 A pedestrian wearing a protective mask is reflected in an electronic stock board outside a securities firm in Tokyo, Japan, on Monday, Jan. 4, 2021. Asian stocks climbed to a new record, as technology shares remained strong in the first session of 2021. Photographer: Noriko Hayashi/Bloomberg , Bloomberg

(Bloomberg) -- Government bonds plunged across Asia on Friday, following a selloff in Treasuries as investors braced themselves for an aggressive Federal Reserve that may fuel further policy tightening in the region.

Yields on Australia’s 10-year sovereign debt surged by about 25 basis points, the biggest such move since June 14. Their counterparts in New Zealand and South Korea both jumped by over 15 basis points, with Thailand’s 10-year yield trailing with a 7-basis-point rise.

The regional slump is capping a week of interest rate hike marathon among central banks around the world, from the US to Sweden and Asian peers such as Indonesia and Vietnam. And yet there’s no end in sight for the collective policy tightening campaign, with the Fed looking determined to tame runaway inflation at the expense of triggering a recession.

Fed overnight indexed swaps are now implying another rate increase of around 70 basis points at the US central bank’s November policy meeting, following the three-quarter percentage point hike on Wednesday. Fed officials have signaled another 125 basis points of rate hikes by the end of this year, according to the median forecast of the Fed’s dot plot.

Many Asian central banks have followed suit, with those in the Philippines, Taiwan and Indonesia also hiking rates on Thursday. Bank Indonesia, previously one of the last holdouts for dovish policy, delivered a bigger-than-expected 50-basis-point hike.

The chorus of hawkish central bank moves has eroded bond returns. A global index of government and investment-grade debt has registered losses of 19% so far this year, the worst performance since Bloomberg started compiling such data in 1991.